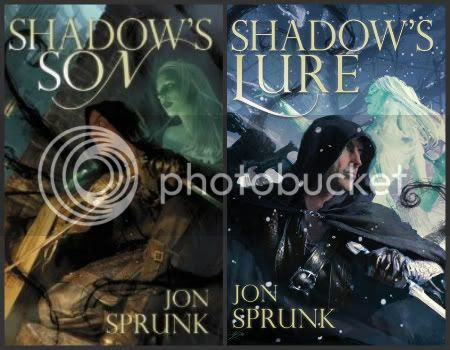 The Shadow Saga by Jon Sprunk

I had been writing for several years, piling up three full novel manuscripts, a dozen shorts, plus countless false starts, but I felt defeated by the mountain of rejection slips I'd accumulated. When I got the idea for a new book about a lonewolf assassin pitted against an entire country, I worked feverishly to get it down on paper. Well, computer drive.

When the manuscript was complete and polished to the best of my ability, I considered where I should submit it. I had just finished the First Law series by Joe Abercrombie, and was struck by some of the similarities in theme and execution between Joe's books and mine. So I wrote an email to the U.S. editor, Lou Anders of Pyr Books, to say how much I'd enjoyed the books, and also to inquire whether he would like to see my new book. Lo and behold, he agreed to read a sample.

When Lou came back with a request to see the rest of the book, I was on Cloud Nine. The next few days were the longest of my life. I'll never forget how I felt when I read his acceptance letter offering to publish my book. After two decades of pursuit, I had finally accomplished one of my most personal and hard-fought goals.

And that's how it all began.

"Overall, a first-rate sword-and-sorcery tale, with intriguing characters, that moves at a quick pace." -- Booklist

"I highly look forward to the sequel and give this novel 5 stars as it deserves keeper status. Recommend for fantasy fans of the sword and sorcery genre and fans of assassin leads." --Night Owl Reviews

"Shadow's Son is easily one of my favorite books of 2010 and I look forward to seeing what Sprunk can add to this trilogy." --Fantasy Book Critic, reviewed by Cindy

In the holy city of Othir, treachery and corruption lurk at the end of every street, just the place for a freelance assassin with no loyalties and few scruples.

Caim makes his living on the edge of a blade, but when a routine job goes south, he is thrust into the middle of an insidious plot. Pitted against crooked lawmen, rival killers, and sorcery from the Other Side, his only allies are Josephine, the socialite daughter of his last victim, and Kit, a guardian spirit no one else can see. But in this fight for his life, Caim only trusts his knives and his instincts, but they won't be enough when his quest for justice leads him from Othir's hazardous back alleys to its shining corridors of power. To unmask a conspiracy at the heart of the empire, he must claim his birthright as the Shadow's Son . . .

Visit Jon online at his website: www.jonsprunk.com and his blog: http://jonsprunk.blogspot.com.