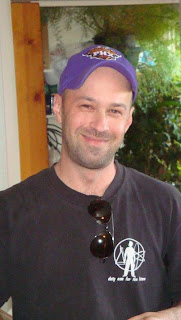 3. Coffee, tea, or milk?
I drink way too much coffee and have an odd fascination with milk. Being a recovering alcoholic, I’ve found insane amounts of caffeine have taken the place of liquor, and that’s just fine with me. I’d rather drink a pot of coffee than a fifth or handle of what I used to drink. Don’t ask about the milk. I really don’t know what that’s all about.

8. Where do you find your inspirations to write?
My life, mostly. Flannery O’Connor said, "Anybody who has survived his childhood has enough information about life to last him the rest of his days." Very true, I think. Sadly, I’ve had many experiences since childhood, and many of them have not been good. Anything can inspire. An entire novel came to me while listening to an 80s pop song. Sometimes I read a book or see a movie and it spawns something. Or I overhear somebody say something and go into "What if?" mode. Very often I’ll get a sentence I like, and simply take it from there, curious to see what happens.

10. Are you into sports or other physical activities?
Basketball. Borderline obsessive basketball fan. I play, though not well. Get me in on a game and I promise you will have the absolute worst point guard on the face of the earth. The Phoenix Suns are my team, though I love the Celtics and the Miami Heat, too. Steve Nash, my favorite player, was a partial inspiration in my novella Shadowboxer. I should probably stop here and not say any more. Otherwise I may begin to analyze the entire last season, i.e. I’ll make myself look like an idiot, and I’ve already done plenty of that in my life.

12. Do you outline your stories or do they just take you along for the ride?
I never outline. I don’t understand how people make that work. A lot of people do, I’m not downing on it in any way, but any time I’ve tried the outline thing, it quickly turns into the actual piece, so for me an outline is more of an obstacle than a help. The one or two times I’ve actually completed an outline, I then never wrote the piece. To me, I had gotten the story out. In a way I’d already written it, and so, not wanting to write it again, it was on to the next story. I don’t take very many notes either, especially not in my first drafts. When I go through a second time I make little notes like "The suitcase is against the south wall, not the west wall" and things like that. For me, one of the joys of writing is the mental juggling. I love bouncing it all around in my head.

14. Who are the biggest influences on your work?
Joe Lansdale is the biggest contemporary influence. His work just blows me away. He was the author who taught me most about technique, as well as how important it is to be honest in your work. David Goodis has probably influenced me the most in recent years. Brutally honest writing. I’ve read Shoot the Piano Player aka Down There about ten times, I think. Cornell Woolrich is another, especially his short stories. Same with Robert Bloch. Donald Westlake, Lawrence Block are two others, and of course my father. A poet disguised in science fiction.

15. Do you still watch cartoons?
Oh yeah, but I don’t really care for any of the new stuff. Uptight CGI or poor impersonations of 1960s Hanna-Barbera cartoons. Looney Tunes and the early Tom and Jerry stuff. I really can’t get enough of that. In my opinion The Simpsons is the only great cartoon in years and even that fell apart around Season Seven. Felix the Cat is so wonderfully surreal, and I like the old Max Fleischer stuff, too, Betty Boop, Popeye, and even the old Superman stuff, to a degree. And the Hanna-Barbera stuff from my childhood is hard to top.

Trent Zelazny was born and raised in Santa Fe, New Mexico. He has lived in California, Oregon, Arizona, and Florida. His short story "The House of Happy Mayhem" was selected as one of the best horror stories of 2009, while his novella "Fractal Despondency" has become an Amazon Mystery Bestseller, even if only briefly. He is also a basketball fanatic.

Find him online at his site: www.trentzelazny.com
and his blog:http://trentzelaznybloggetyblog.blogspot.com.