1. Which of your characters is your favorite?
I listened to author Mary Doria Russell (The Sparrow, Doc) speak recently about how she fell in love with her characters. But she is a serial monogamist. Once she is through with a character, she moves on and falls in love with the next one. I understand that, but there are threads that keep calling me back to certain characters (some from works I wrote long ago and never published). I love the two leads in my upcoming book The Gutenberg Rubric, but I’ve already returned to my computer forensics detective Dag Hamar from For Blood or Money and am working on a prequel that features him as a much younger man. There is something about Dag that continues to draw me to him.

3. Coffee, tea, or milk?
Hot, strong, and black. I am a coffee drinker. I inherited the trait from both sides of my family and have often used family stories about coffee in my books. Dag Hamar, even with a weak heart and doctor’s orders to stay off caffeine, has a double-espresso pulled over two shots of hot water whenever he can get to his favorite coffee shop. He sums it up this way (straight from my heart):

"Espresso is an art, both in creation and consumption. To drink it, you hold the cup in both hands and absorb the warmth through your fingers as the aroma tickles at the edges of your nose. Don’t go too fast. Don’t dive in and take a drink and burn your tongue. Just hold it there and breathe. Then slowly bring it closer—about four inches from your face—and inhale deeply. A properly-made espresso will pick you up from that distance and jumpstart your heart. I can feel it working before the cup actually touches my lips. The first sip should be mostly crème. That’s the oily foam that rests on top of a freshly-pulled shot of espresso. Just beneath the silky foam comes your first taste of heaven. The coffee is strong enough to dry your mouth out. The flavor washes across the sides of your tongue first then sweeps up to meet in the middle. As soon as the black liquid hits your throat, you are compelled to inhale again, sucking air down with the coffee until your lungs feel like they will explode, then lowering the cup so you don’t cool it, expelling the air out through your mouth in a long sigh."

4. What else can you do besides write?
I’m a publisher and book designer, not only of my own works, but for others as well. I do freelance work including everything from cover design to page layout for both print and eBooks. In spite of the fact that the eBook industry is evolving rapidly (yet again), I’m able to produce great looking eBooks every time. Authors should be as proud of the electronic version of their books as they are with the paper they hold in their hands. I have several patents in layout and typography for electronic devices, so I know it from the inside out. I write a column on independent publishing for Line Zero magazine each quarter that deals with different aspects of getting work into print and eBook form.

7. What is the toughest scene you ever wrote?
I always have trouble with book endings. The last scene in For Blood or Money was very painful for me to write and I wrote two (unpublished) sequels before I could put it to rest. On the other hand, the entire story of Steven George & The Dragon was written to get to the last scene. I knew what that was months before I wrote it. I think anytime you write something that is painful for a character you love, it is painful for the author.

12. Do you outline your stories or do they just take you along for the ride?
Yes. Different stories require different approaches. I spent months planning and outlining For Blood or Money—entire wall-charts filled with what was happening to each character in each chapter of the story, whether they were in the chapter or not. Then I wrote the entire story in less than 30 days. On the other hand, I had a starting point for an OCD dragonslayer counting the footsteps on his quest and an end-point facing his dragon in Steven George & The Dragon. Neither Steven nor I had any idea how we were going to connect the two. But I wrote that in 30 days as well. The fact that I draft a book in 30 days (that’s my rule), however, doesn’t mean that it’s finished then. I re-write and revise as much as two or three years before I’m satisfied with it enough to publish.

15. Do you still watch cartoons?
I had to answer this question. I never really watched cartoons much when I was growing up, though I loved Mighty Mouse and Tom Terrific. That dates me. But my 18-yo daughter and her friends kept talking about Anime, so I grabbed her Netflix list and started watching The Claymore. One thing led to another and I have watched more cartoons in the past two months than in all the years growing up! I think it’s a phase I’m going through. My wife certainly hopes so! 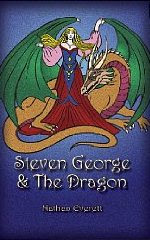 Nathan Everett has been involved in the publishing industry for over 30 years as a writer, designer, and publisher. He is managing editor of Long Tale Press. He began publishing magazines and trade journals in the early 80s and was among the first “desktop publishers” in the country, training graphic artists and production technicians on the new computerized technology. He has six patents in the field of page layout and typography and worked on the OeBF ePUB 1.1 specification. He is author of four published books, Publication Design from Corporate Publishing (1988), For Blood or Money from Long Tale Press (2009), Feeding the Board (fund-raiser cookbook for Studio East, 2010), and the recently independently-published Steven George & The Dragon (2011). His upcoming thriller, The Gutenberg Rubric, will be released in mid-July.

Nathan lives in the Pacific Northwest with his wife, daughter, and two rescued greyhounds. He only writes when it’s raining, so it’s been a very productive year!
author interviews for blood or money heidi ruby miller heidi's pick six nathan everett steven george and the dragon