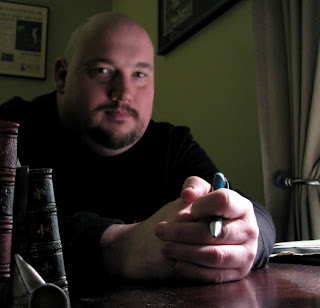 1. Which of your characters is your favorite?
Dillon Galway in Grit City is my favorite character to date. He’s a freelance journalist that kind of thumbs his nose at society’s idea of what a twenty-something, college educated man should be doing with his life. I started my writing career in freelance journalism. In many ways, Dillon is my persona from ten-years-ago. Much like me, he abandoned money for idealistic pursuits. He also embodies a simple innocence that I never really possessed. I draw that character trait from my son, Nick.

4. What else can you do besides write?
I spent a long career trying my hand in several careers. In high school I went to a local vocational school part-time to learn carpentry. I hung dry wall for a few years and then taught carpentry at the same school. I have a degree in engineering design and followed that path for ten years. I’ve also worked as a technical writer, bartender, journalist, landscaper, delivery driver, firefighter, retail clerk, and a few others.

As a writer, I believe it’s my job to experience as many facets of life that’s realistically possible. I was a young father, so I never had the ability to travel and see the world. Exploring the possibilities around me has always been a subconscious pursuit.

6. Pop culture or academia?
I draw a distinct line between those two, if we frame pop-culture as the grind of the real world. It’s the difference between the rule makers and the game players. Once upon a time I taught. True academics tend to enjoy observing the world and then institutionalizing new innovations in the classroom. Game players roll their sleeves up and thrust their ideas into the batter of the mixing pot to find out what forms the best possible pancake.

I respect both a great deal, but identify more closely with the game players. If the new medium of fiction I’ve created (emotobooks) is successful, it will undoubtedly be weighed by academics, criticized, and given a value. That’s their role: to decide what deserves to be institutionalized.

It’s a fun back and forth. I’m pleased my contributions spark debate.

7. What is the toughest scene you ever wrote?
All of them. Let’s be honest. I haven’t met one writer that’s said, “Oh, this kind of scene is so easy to write.” We don’t write because it’s easy. Writers pour their souls into the craft to help shape our own individual perspective of the world. But we have something to say. That something helps shape the world perspective for our readers.

With that said, I do find high-performance action sequences to be a toughie. As a novice writer I struggled to remove the moving playing in my head and to instead concentrate on the thoughts and feelings of my point of view character in action.

It’s not about listing the punches and gunshots that filmmakers suffer to show in movies. It’s about determining what each sword thrust means to the character. Will she live or die? If she’s stabbed in the right arm, she will no longer be able to hug her children the same way. Why is her best friend intent on killing her? Who gains to profit? Stuff like that.

9. Food you could eat everyday.
Meat.

14. Who are the biggest influences on your work?
Believe it or not, it’s Chuck Palahniuk. Anyone who’s read this author knows he’s such a weirdo and the furthest thing from a pop fiction writer. Sure, Dan Brown and Dean Koontz are swell. I find myself emulating their styles in specific scenes. It’s Palahniuk, however, that gives me motivation to write in the first place.

I wasn’t born a writer. I didn’t even enjoy reading until after I reached drinking age. When I got into reading in a big way I started with nonfiction. Books on liberal politics, hookers, drugs, etc. were a good time for a while. Science fiction and urban fantasy thrillers are the pop fiction books that hooked me over time. But it was Palahniuk that pushed me over the edge. His books inspired me to pursue fiction writing professionally.

Ron Gavalik has dedicated his life to the written word. He’s practiced a long and successful career in fiction writing, journalism, and technical documentation. His short fiction has appeared in several magazines and online venues. His news articles have informed thousands of readers throughout the United States.

He conceived the new medium of emotobooks in 2010 while earning his M.A. in Writing Popular Fiction from Seton Hill University. Grit City is the maiden serialized story, and is receiving accolades among a large and diverse base of readers.

Born and raised in Pittsburgh, Ron spends much of his free time in the outdoors of Southwestern Pennsylvania. He enjoys fishing, hiking, and riding his trail bike.