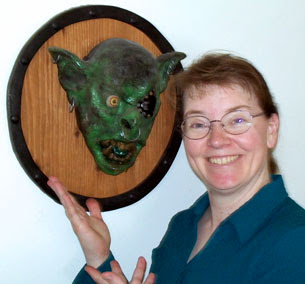 1. Which of your characters is your favorite?
That's like asking who my favorite child is. I love them all, except the villains. They creep me out. I had the most fun in Nexus Point writing scenes with Will Scarlet and Roland the monk of the Order of Myrln. Will is a linguist undercover on the planet although he hints at working for a secret organization. That mystery will be cleared up in several short stories that will hopefully be published before too long. I can always post them on my website for free. Roland is a sweet person. He's got a bright future, but you'll have to wait a few books before you meet him again. I'm still half in love with Tayvis. Scratch that. If he showed up on my doorstep and I were twenty years younger, I'd run away with him in a heartbeat. Except he wouldn't break up a family. He's not that kind of guy. Some days I almost envy Dace. She gets the hot guy eventually. But I don't envy her the trouble she gets into. All of my characters were fun to play with. Even the villains.

In book two Priestess of the Eggstone, coming out sometime this year, I introduce a bunch of fun new characters. Leon is my favorite from that book. Think of the short, sleazy, loudly dressed lawyer, then make him a really nice guy who just pretends to be a smarmy used-car salesman. Oh, wait, Lady Rina is a lot of fun, too. And Jerimon and his sister, Jasyn. And the Sessimoniss, eight-foot tall lizardmen with a grudge against Jerimon and Dace. Jerimon stole their god and they want it back. Dace is just in trouble with a crime syndicate and the Patrol.

I just have fun with my characters. I love quirky fun people.

3. Coffee, tea, or milk?
None of the above. I drink mostly water. If I'm in a real decadent mood, I'll splurge on guava nectar or cran-raspberry juice.

4. What else can you do besides write?
I can belch on command. I can blow farts on my arms and hands and imitate any kind. I know all the "pirate walks into a bar" jokes. I can throw dirt clods clear across the backyard. I can tie all the basic scout knots and lash a tower. I can solder and arc weld, though I haven't done it in years. I can make great pig noises. I can imitate a dog so well I set off the whole neighborhood into a frenzy of barking. I know all sorts of random strange songs. I can cook anything except fudge. When I make fudge it turns out like frosting. When I make chocolate fudge frosting it turns into fudge AFTER it's on the cake. I piece quilts but I hate quilting so I tie mine. I crochet Cthulhu toilet paper roll cozies in wild colors. I teach math, basic physics, chemistry, geology, nuclear science, and astronomy. I run a planetarium for the Christa McAuliffe Space Education Center. I also run a star trek simulator there. I sew costumes for them, too. I can't grow zucchini. It always dies when I plant it. I used to be able to put my feet behind my head, but after eight kids, my body just isn't as flexible as it used to be.

7. What is the toughest scene you ever wrote?
A scene where the guy thinks his true love has dumped him for someone else. I struggled with that scene over and over. I finally had to spend a week talking to my husband and any other guy that would listen about why this character would love that character. I had to understand why he loved her before I could write the scene.

13. Celebrity crush.
Peter Strauss as Wolf in Spacehunter in the Forbidden Zone
Gil Gerard as Buck Rogers in the campy late 70s tv series
Carey Elwes as Robin Hood in Men in Tights
Kevin Sorbo as Kull the Conqueror
Kevin Sorbo as Dylan Hunt in the tv series Andromeda
Robin Hood the Fox from the Disney cartoon
And my all-time crush, since I was eleven-
Harrison Ford as Han Solo in the first (and best) Star Wars movie, IV: A New Hope
and Harrison Ford as Indiana Jones in The Temple of Doom
There's more - mostly actors who played Robin Hood or one of the Musketeers or Flash Gordon - but I'm terrible at names and my husband might start having problems with his inferiority complex again.

14.Who are the biggest influences on your work?
That's an easy one - Andre Norton and Elizabeth Moon. I adore everything they both wrote. I am in awe of Andre Norton's bibliography. She was a genius at storytelling. Elizabeth Moon writes great space opera. I want to be her some day. I read a lot of the classics - Isaac Asimov, Robert Heinlein, Arthur Clarke, Jerry Pournelle, Larry Niven, David Eddings, Terry Brooks, CJ Cherryh, and a host of newer authors - Julie Czerneda, Frances Pauli, Larry Correia, and others. When a book really grabs me, I try to figure out why and how they did it. If I can get carried away by the story and not even notice the writing, I consider that a fantastic book. 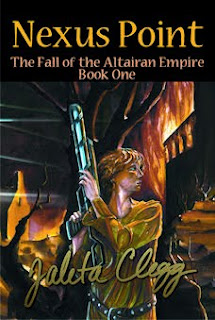 Jaleta Clegg loves to play with words and tell stories. She writes science fiction adventure novels, short silly horror stories, and the occasional fantasy or more serious story. She lives in Utah with her long-suffering husband who sometimes wears spandex so it all evens out, a horde of children that claim they are all hers, an ancient toothless cat who refuses to die (he's 17), a sweet natured black lab mix, and a cranky pampered housecat named Chunkalicious Rex, king of LardButt.