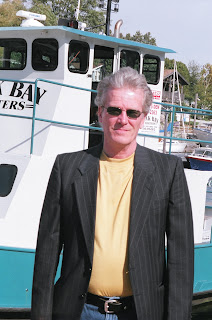 1. Which of your characters is your favorite?
I enjoy all my characters including the way the receptionist smiles when you check-in to your hotel room. But, I’ve written the most about Dr. Sydney Taylor Caldwell, the protagonist in Never Regret Tomorrow. Being a straight guy, it’s interesting to live a vicarious life through the thoughts, words, feelings, perceptions and actions of the female psyche. (This is not about sex...sorry.) We can not truly understand someone, male or female, unless we walk in their shoes. This must be the reason writers have a silent compassion for the other person.

2. Tell me about your travels.
I was born in 1949, so I have a unique slant on traveling. At 14, I stepped onto the side of the road, stuck out my thumb and the first car stopped. I met this great couple. Twenty miles later they dropped me off in a downtown city of 200,000 people. I looked around, stuck out my thumb and I was back home within forty-five minutes.

I fell in love with motion. At 18, I was hitchhiking to Montreal, New Orleans and Toronto, etc. I fell in love with North America. I’ve never been to Alaska or New Foundland, but I have covered the rest of the states and provinces, up and down, diagonally and sideways. I can draw you a map of Route 66 as if it’s in my hometown. My hometown is NA. I didn’t stop hitching until my late 20s. Even in my 50s, I stuck out my thumb from Joplin MO to Detroit, MI. Why not?

If this was a R-rated interview, I would describe parties that are stranger than fiction including partying with State Governors, Members of Parliament, U.S. Senators, millionaires, prostitutes and Hell’s Angels…and a lot of beautiful women. (The beautiful women were the only common denominator at each party.) As a teen, a lawyer in Florida gave me my first joint. I bought a “lid” of Jamaican from him as we crossed the state line into Georgia. A driver took me to my first bar when I was eighteen.

I loved the people as much as I loved the places and events. Weather? It didn’t matter as long as I was in motion. When I ran out of money people bought me lunch. Needed a place to stay? Either under a tree or in someone’s bed. In Canada at 15, you could go into a Cop Shop. They’d put you in jail for the night, so you’d be safe. In the morning, they’d feed you breakfast, drive you to the closest highway of your choice and wish you all the best. I kid you not!

In 1967, I hitched through the South. I made a few wrong turns and ended up in the colored district of Chattanooga TN. (I-75 was incomplete.) Everyone was black except me. I walked into an all-black restaurant and sat down at the counter. I was the center of attention. The guy next to me asked, Where you from, boy? I said, Canada. He stood up and announced to the full restaurant that I was from Canada. Everyone seemed to instantly approve of the first white boy ever to walk into their restaurant, ate breakfast and live to tell about it. They were the friendliest people ever imagined. I had no idea I wasn’t supposed to be there until later.

When my two children were growing up they didn't get away with much. I had already done just about everything they could imagine. Of course, I didn't give them any ideas.

4. What else can you do besides write?
I can live with a very peculiar form of dyslexia. To make or even talk about a right hand turn, I must move my right hand to know right from left. In the 1950s, teachers did not know what dyslexia was. I was just another slow learner. However, I was determined to succeed. To this day, I can not remember how to spell certain words like received. I have difficulty with hear vs. here, alter vs. altar, etc. My mind has great difficulty distinguishing the subtle differences. According to the recent experts, this came with a blessing. My imagination is limitless. I am able to stop a scene in my mind’s eye, run it forward or backward, turn it upside down, inside out and discover the finest details. I am grateful, although I experienced a mountain of childhood pain thinking I was stupid.

5. Who are you reading right now?
My favorite all-time author is Taylor Caldwell. I just finished, I, JUDAS, (1977) for the third time. If I enjoy a book, I’ll read it three or four times to absorb and understand the author’s subtleties of the written word. Words are beauty in manifesting image and action.

8. Where do you find your inspirations to write?
Two of my favorite hobbies are metaphysics and meditation. From this understanding, I receive my inspiration from silence. I’ll sit there in total silence and allow an image to play across the screen of my mind’s eye. SECRETS is my current book that now is in its final stages of editing. (I find the power of the written word arrives through the editing process, which enhances the initial inspiration.) SECRETS started out as an image of twenty-one year old female twins, but a male criminologist stepped onto the stage. Then a beast, half-human half-animal walked by. It was obvious it was genetically engineered. But the criminologist turned to the beautiful twins and asked, “How will I discover that they were genetically engineered? Just by looking at them I know one is good and the other is evil.” That was the initial imagery born out of silence on the screen of my mind. Once this happens I allow these images to develop and mature into a complex story. I do not impose myself at this stage. It's their show. My life’s philosophy was born out of the same silence: "Every experience leads to a greater understanding of who we are and who we can become." You can check out my new book, Never Regret Tomorrow at http://www.GPaulGrondin.com.

10. Are you into sports or other physical activities?
In my youth and teen years, I played baseball, basketball, swimming, hockey, track (long distance) and tennis. I was on the gymnastic team at Kent State University. When you’re considered to be ‘stupid’ in school sports is a great equalizer. I hope to return to scuba diving, if I can sell some books. Now I enjoy walking, playing tennis and downhill skiing. My favorite slops are at Aspen and Teluride, CO. What a great place to meet people sitting around a fireplace, drinking wine, eating finger foods and...sorry, you will have to use your imagination.

11. What kind of music speaks to you?
12. Do you outline your stories or do they just take you along for the ride?
13. Celebrity crush.
14. Who are the biggest influences on your work?
15. Do you still watch cartoons? 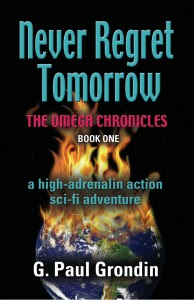 Ever since the first Star Wars movie flashed across the big screen in 1977, forever changing the way we think about Sci-Fi action flicks, G. Paul Grondin has been asking himself, ‘What would happen if Star Wars came to Earth?’ After exhaustive research and years of writing, Paul has created The Omega Chronicles. The first episode, Never Regret Tomorrow, begins on Earth, but the entire series of The Omega Chronicles will take us throughout the galaxy as two galactic superpowers, the Galactic Brotherhood and Galactic Federation, battle it out before returning to Earth again. Paul delivers a galactic historical perspective based on his research and knowledge of planetary evolution, prophecy, records of ancient civilizations, and secret societies with a skillfully employed imagination and visual perspective. His characters are emotionally human as they expand their awareness of what lies beyond their small corner of the galaxy. Through the perpetual motion of high-adrenalin action, he invites us to be a part of the journey. In the end, will the inhabitants of Earth be ready for the return of the galactic superpowers?

G. Paul Grondin was educated at Kent State University, Ohio, and the University of Windsor, Ontario, receiving honor degrees in English Literature and Psychology with a background in history and mathematics. Paul is a down-to-earth individualist having worked in construction, writing, sales (his own company) and over-the-road truck driving in Canada and the U.S.A. Currently, he lives on the Canadian side of the lower Great Lakes overlooking Michigan and Ohio. Visit him online at http://www.GPaulGrondin.com.
author interview g paul grondin heidi ruby miller heidi's pick six never regret tomorrow