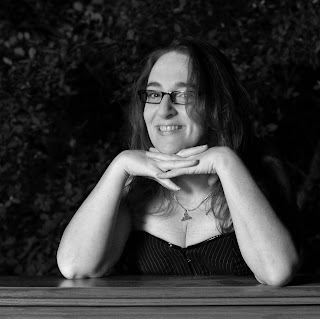 1. Which of your characters is your favorite?
My favorite is usually a character in a story I either haven't written yet or am in the early stages of writing. I currently have a post-apocalyptic YA short story I'm finishing up and the main character is a seventeen year old girl named Sophie who is terrified that she's going to go crazy like every adult she's ever known. She's a scrappy little thing who isn't afraid to brain someone with a two by four if they're after her, but will have some much tougher decisions coming up very soon. I'm really tragically in love with her.

2. Tell me about your travels.
I adore traveling, though I don't do it often enough. Over the 2009-10 holidays, my husband and I went on a three week trip to Europe to spend time with his family, who are Dutch, and also have a bit of a honeymoon, since we never really got one. We went to the Netherlands, Germany, Italy, and England. I was sick the entire time and we got snowed on in every country we were in. Still, I had an amazing time and got to watch my husband ski, which I'd never done.

I find other cultures fascinating and one of the reasons I enjoy traveling, especially abroad but even within the United States, is the ability to experience things outside of my own box. I recognize that what I may view as "the way" to do things isn't the only way, but being able to interact with people in other cultures and see the sometimes vast and sometimes small differences not only improves my writing, but it also enhances who I am as a person.

3. Coffee, tea, or milk?
Tea, with milk! I take my tea "in the British fashion." But I do make a mean cup of cappuccino!

8. Where do you find your inspirations to write?
I don't think I'm particularly inspired all the time. I'm not one of those writers who has more stories in her head than she can ever write in her lifetime. I have four stories. Maybe five. Everything else I steal. ;)

12. Do you outline your stories or do they just take you along for the ride?
I'm horribly unorganized in my rough draft. I know writers who have big storyboards and multi-page outlines. They spend loads of time arranging and rearranging so everything is exactly as it should be. I've got a big stew pot in my head and that's where my story bubbles. I'm only just now getting comfortable with character sheets and I still have a habit of forgetting about them. Essentially, I jump into the river and end up somewhere downstream by the time I'm done. The idea of outlining my story terrifies me.

In later drafts, I have all the plot points already in the manuscript and I put together the rough synopsis as I'm working through the revisions. I'm less freaked out about the prospect of creating a map of the story than in the first draft because I'm not putting things that haven't been created yet into an outline. That is what I have the biggest problem with in the first draft. If I have an outline and the story veers off path, I freeze and have an issue moving forward. Some voice in my head says, "It's on that little piece of paper and you'd better follow it!" It's ridiculous, but I've found that it happens again and again. So I just write, then outline later.

15. Do you still watch cartoons?
I don't watch much television at all. Fun fact: I haven't owned a TV since 1996 which makes me horrible at current pop culture references (but give me 80s music trivia and I'm your girl!). Having admitted my lack-of-tv-ness, I am a sucker for Animaniacs!

Venessa Giunta is a senior editor for Loose Id, LLC, and edits fiction freelance. She wrote bad short stories and angsty poetry off and on through high school then took a very long hiatus. It was probably because of the poetry. When she turned thirty-five, she realized that what she really wanted to do was write. After many short story rejections, it occurred to her that some sort of writing classes might be beneficial. She subsequently worked toward and was awarded her Master of Fine Arts in Writing Popular Fiction from Seton Hill University. Venessa lives in the metro Atlanta area and is lucky enough to reside with her muse who masquerades as her husband. And she no longer writes poetry. It’s better for everyone that way. Visit her at http://www.venessagiunta.com.