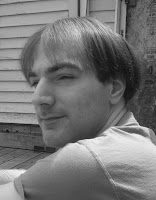 1. Which of your characters is your favorite?
2. Tell me about your travels.
3. Coffee, tea, or milk?
4. What else can you do besides write?
5. Who are you reading right now?
6. Pop culture or academia?
7. What is the toughest scene you ever wrote?

8.Where do you find your inspirations to write?
My inspirations usually come to me at really random times, like when I'm mowing the lawn, in the shower, or sitting on the toilet. Sometimes it'll be a scene that pops into my head that I think would be really cool. Other times, a line will pop into my head, and I'll build a story around that line. Sometimes, I'll see something, and a story will come out of that.

11. What kind of music speaks to you?
I love music that is complex and/or full of the musicians' energy. When a song is complex, it gives the ears a variety of pleasant sounds to listen to instead of the same notes and chords over and over. When an artist performs with energy, it's contagious. When an artist is clearly having fun while performing, it's fun to listen to their music.

12. Do you outline your stories or do they just take you along for the ride?
Normally I'll get an idea in my head and I'll let it simmer there for a while, until I feel the time is right. By that time, I usually have a general idea of where it's going, a beginning, a few things that happen on the way, and the end. When I start writing, though, I'm often surprised by the challenges my characters have to overcome, and sometimes I'm even sitting there thinking, "gee, how are they going to get out of this alive?" I might know my characters a little bit going into the story, but as I write, they really reveal themselves to me. One might turn out to be a total trickster, one might be a jerk, and so on, and I didn't even know it, yet.

13. Celebrity crush.
I have a lot of them, but my first and biggest is Jesse McCartney. Honorable mentions include Taylor Lautner, Gerard Way, and Miyavi. Honestly, though, this list could go on for a long, long time.

14. Who are the biggest influences on your work?
First and foremost would probably be Ayn Rand. While some of her politics are a bit extreme for my tastes, her views on the importance of individuality and free-choice resonate with me. I love how her novels always sought not only to tell a great story, but to use that story as a way of expressing her beliefs and ideals. Whenever I write, I strive to also make readers think and examine things in their lives and in the world around them. Secondly would be Mercedes Lackey. Although her genre of choice is fiction, characters are first and foremost to her, and are so well developed that they feel like real people. In my stories, even though they can sometimes be a bit fast-paced, I like to attempt to breathe life into my characters, so that my readers can empathize with them and really be involved in the story instead of feeling like an impartial spectator.

15. Do you still watch cartoons?
I'll watch anything that resonates with me, whether it be a deep, complex drama, or a cartoon. Certain cartoons actually have a great deal of depth, and make outside references that are amusing to those of us who are "well read" in pop-culture. I've seen references to a German movie called 'Run Lola Run', H.P. Lovecraft's Cthulhu mythos, etc. I think any good cartoon should be made to appeal to all ages.

Richard Veysey has been telling stories since he could put words together to form a sentence, and writing since he learned how to read. In his free time, he likes to write, program and play video games, make all-natural moisturizers, face washes, etc., and hang out with his friends. He currently resides in South Portland, Maine and works as a cashier as he tries to get his first book published. He also hates writing about himself in the third person. Find Richard and the other Greater Portland Scribists at their blog (http://scribists.blogspot.com) and on Facebook (http://www.facebook.com/GreaterPortlandScribists). And buy their new book Scribings at Smashwords (http://www.smashwords.com/books/view/65295).
author interviews greater portland scribists heidi ruby miller heidi's pick six richard veysey