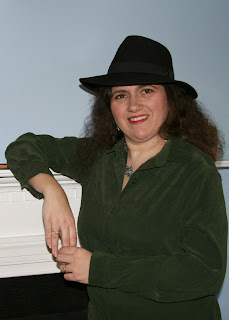 1. Which of your characters is your favorite?
Oh, that's too hard! I love all my characters, especially while I'm working on their novel, so let's talk about them:

In Neeta Lyffe II: I Left My Brains in San Francisco, my favorite character of the moment is Ted. His background is such fun: His mom is part of a communal marriage (he calls them all his "cousins"), but he's waiting for monogamous marriage; Mom, hence thinks he's "repressed," and is trying to encourage him. If he's repressed, that's the only place. He loves to turn on the siren as an excuse to drive crazy, jumped a broken bridge, and danced the Ninja Monkey which was popular when he was around ten. His enthusiasm is contagious, and he makes Neeta laugh. He's also incredibly brave and impulsive. In Neeta Lyffe: Zombie Exterminator, for example, he accidentally used a flamethrower around a leaking gas tank. I loved "watching" as he moved from surprise to dismay to thrill.

Not of This Fold: I'm collaborating with Colleen Drippe on this one. Fr. Drake has been assigned to reign in a liberal priest and get his parish back in line, but parishioner Miss Bella has other plans. She's from the faerie dimension, and she has him pegged to bring the Good News and some good morals to the many fantastic creatures there. Getting Fr. Drake to believe is hard enough, but when he transits to the faerie, he takes on a dragon form--the most fearsome and evil of all creatures! I'm enjoying putting poor Fr. Drake through one stress after another, whether it's the Unitarian leader trying to play footsie with him under the table at the ecumenical picnic or him trying to convince himself that yes, he really IS a dragon in a fairy realm and not the victim of a hallucinatory episode.

Mind Over All: This is the last in the Mind Over trilogy; Mind Over Mind comes out in August from DragonMoon. Joshua, the intern who helps Deryl control his psychic powers and regain his sanity, was definitely my favorite in the first book. This time, though I'm enjoying what Deryl is doing. He's got a lot to accomplish--from dealing with his past to forgiving old enemies to preventing two planets from colliding. He's desperate to protect his pregnant wife, even from herself, and he's pitted against the people of three worlds. Lots of challenges for him.

7. What is the toughest scene you ever wrote?
I'm not good at visual description. I tend to be a minimalist and let folks fill in with their imagination. In Neeta Lyffe, Zombie Exterminator (2010: Damnation Books, http://zombiedeathextreme.com), however, I had a highly visual, location-dependent scene--the final zombie attack at a mattress factory. (No one is sure why zombies are attracted to mattress factories, but perhaps they're just seeking a more comfortable final rest.) It was also in Los Angeles, so I had to be accurate while no insulting any existing businesses.

I spent an entire day on Google Earth trying to find the perfect spot. I finally settled on an empty lot near West Burbank and Front Street. I stared at that stupid lot, looking at it from all angles, for hours until I could see the factory, the large chain-link fence, the expanded on-ramp to the highway for the increased truck traffic, even the bushes. The next day, I was able to write nearly the entire scene, jumping back to that lot on Google Earth for directions. I must have done okay, because I recently got a comment from someone who knew exactly where I'd had my battle--and complained about the on-ramp! (He missed that I'd expanded it.)

I so love Google Earth!

8. Where do you find your inspirations to write?
Everywhere! Again, there are so many, I'll pick a couple of stand-out incidents:

Television: DragonEye, PI (http://dragoneyepi.net): I wanted to write for an anthology of dragons, but couldn't come up with a new angle. The kids wanted me to watch Whose Line Is It, Anyway, with them, so I gave up to go watch. As Colin Mochrie and Ryan Styles did a noir routine, I realized I could do that with a dragon! Thus came Vern a cynical Sam Spade-style detective operating on the wrong side of the Interdimensional Gap. I really enjoy this world because I can parody or be serious.

Chatting with Friends: When folks asked Damnation Books for a novel starring Neeta Lyffe, I didn't have a clue what to do. One Wednesday, I was chatting with friends in The Writers Chatroom (http://writerschatroom.com). The topic had drifted to reality TV shows, then to memorable first lines. Someone wrote "They ate Jorgenson first." Suddenly, I had this vision of a zombie-killer reality TV show episode gone wrong. Neeta Lyffe, Zombie Exterminator was born! Incidentally, check out the reality TV show website http://zombiedeathextreme.com.

10. Are you into sports or other physical activities?
I'm a couch potato by nature, but we are taking haidong gumdo lessons. That's Korean sword martial arts. It's a lot of fun. We concentrate on forms rather than actual fighting. This week, I learned the roll for Form Five. The first time, I was so nervous, I dropped my sword, so I did the roll and came up empty handed. Just a little embarrassing, but I was so stoked that I could roll, that I didn't care. I haven't rolled like that since first grade! (so about 35 years) The first Pan-American games are coming up in July. My husband and daughter are competing.

12. Do you outline your stories or do they just take you along for the ride?
I usually have a rough idea of where I need to start and where I might end, plus some stops on the way, but otherwise, the characters lead me. In fact, if I try to take charge, they will defy me. Case in point: Live and Let Fly (coming April 2012, MuseItUp Press, http://dragoneyepi.net). I actually had a (for me) extensive outline for this one. My dragon, Vern, and his partner, Sister Grace, a magic-slinging nun from Faerie, are sent on a mission for the US government. They've lived in our world awhile, and have some familiarity with Mundane technology, but there's still a lot they don't understand. I wanted them to have a plucky sidekick character to swoop in and accomplish the mission while they flounder around elsewhere. That character was Heather, the fianceé of their friend Charlie, another Faerie on this mission.

Heather outright refused to be the plucky get-it-done type. She wanted to be a damsel in distress for her Charlie. In fact, she got kidnapped in the second chapter! Oh, it's a good thing the book is all about parodying clichés. I had to toss the outline and let them go their own way. (She did show some pluck in the end, incidentally, but still refused to be a hero. Charlie actually leaves the mission to protect her. In the end, the Navy finds them in an inflatable raft sharing a bottle of champagne.)

The book, however, turned out to be so much better than if I'd gone with my outline.
Now that I think about it, there was another character that refused to play the role I set out. I won't tell you who that was, or it spoils the mystery.

15. Do you still watch cartoons?
Yep! I love Avatar: The Last Airbender, and Phineas and Ferb the best. Of course, I still have a soft spot in my heart for Road-Runner and Buggs Bunny. My husband and I fell in love trading puns over those cartoons while at a Shakey's Pizza. November is our 21st anniversary!

After being a straight-A student, Karina L. Fabian now cultivates Fs: Family, Faith, Fiction and Fun. From and order of nuns working in space to a down-and-out faerie dragon working off a geas from St. George, her stories surprise with their twists of clichés and incorporation of modern day foibles in an otherworld setting. Her quirky twists and crazy characters have won awards, including the INDIE book award for best fantasy (Magic, Mensa and Mayhem), an EPPIE award for best sci-fi (Infinite Space, Infinite God) and a Mensa Owl for best fiction (World Gathering), and top placer in the Preditor and Editor polls. In May 2010, her writing took a right turn with a devotional, Why God Matters, which she co-wrote with her father. Mrs. Fabian is former President of the Catholic Writer’s Guild and also teaches writing and book marketing seminars online. 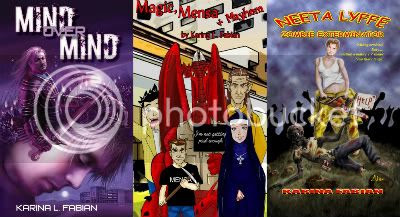