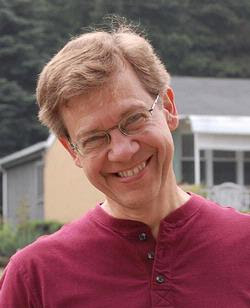 2. Tell me about your travels.
I love to travel in the western United States. The deserts, the mountains, the thick forests—these are the closest I get to alien worlds. I’ve been in Canada and Italy but I have a great affection for Wyoming, Utah, Montana, Oregon, “naked geology,” tormented coastlines, volcanic wastelands, the accidental rainbows of rocks, “deep time” exposed right in front of you, other eras on display, death valleys where a vast lid seems removed, lakes that appear like the eyes of the earth, mountains where the universe comes down at night and plays.

4. What else can you do besides write?
Well, I teach, but that’s obvious, and I love doing it. I enjoy photography, especially of landscapes. I’ll come back from a two-day trip in autumn with nearly a thousand pictures (praise the memory-space of digital cameras—I used to use film and I confess I do not miss Kodachrome). I don’t actually “do” astronomy and geology but these two fields I have always pursued. I had a rock collection as a kid and a Meade telescope as an adult. I wish I could teach courses in both, though I’d have an easier time with art history.

5. Who are you reading right now?
This is strongly influenced by what course I’m currently teaching, so I often offer classes where I can include things I want to read. I’m doing a lot of “slipstream” at the moment or “interstitial” “hybrid” works: short stories from anthologies with such titles, even Borges and Calvino, but also novels by Cory Doctorow, Jasper Fforde, and John Crowley. I find that reading slipstream provides much incentive to write: it’s liberating, and I’ve pulled out some “failed” short stories and re-started them as slipstream. My next class will emphasize recent SF, which is just what I want to look at: Blindsight, The Windup Girl, Boneshaker, Spin and hopefully works by Jim Bishop, Alastair Reynolds, Ian McDonald, and Iain M. Banks.

8. Where do you find your inspirations to write?
Though I can get ideas from “ideas,” events, history, myths, legends, what inspires me the most is usually visual. A photograph, a drawing, a work of art, a panel in a graphic novel, anything that is striking both visually and emotionally, that produces a mood, a strong sense of place but also “presence,” a slight taste of the haunted, of wonder, of the sublime. A picture of a person can inspire me more than the person him/herself. What the person is can “fill out” the character, but the excitement comes in the visual connection, the bolt, the strike.

12. Do you outline your stories or do they just take you along for the ride?
Yes, but it’s a thin outline. What I almost have to do before I start writing a novel is make a list of what I hope to be in each chapter, and I keep going till I get about 18 chapters listed, and there’s often just a phrase or two for one. But once I’ve completed that, I feel I have enough “direction” to start working. Without this slight framework (and it changes a lot as I go along) I feel I’m wasting writing time if I start before: too much of what I’d be doing would have to be redone. So I need some idea, however slight, and spelled out in a list, of where I’m going.

14. Who are the biggest influences on your work?
There’s always a mixture of original influences, what you read as a kid that inspired you to write in the first place, and recent writers whose style or subject matter you admire. Andre Norton and Poul Anderson are, hands down, the SF writers who encouraged me the most when I was young. Others were Arthur Clarke, Clifford Simak, and Ray Bradbury. Underlining the visual inspiration mentioned above, I’d have to include the Sunday comic strips of Flash Gordon (those illustrated by Mac Raboy) and the SF comic books, Strange Adventures and Mystery In Space. For more recent writers, Dan Simmons, Jack McDevitt, Peter Hamilton, and Kim Stanley Robinson have been very influential. I loved the return to space opera in the 90s.

Dr. Albert Wendland grew up in the Pittsburgh area, attending both Carnegie-Mellon University and the University of Pittsburgh. At CMU, he majored in physics with the intention of going on into astronomy and writing science fiction in his off-time. He soon pursued a Ph.D. in English literature instead and has been teaching at Seton Hill ever since. Al is now the director of the Writing Popular Fiction MFA Program. His publications range from magazine and journal articles to poetry and short stories, as well as the non-fiction book Science, Myth, and the Fictional Creation of Alien Worlds published by UMI Research Press. He currently has a Science Fiction novel he’s shopping around.