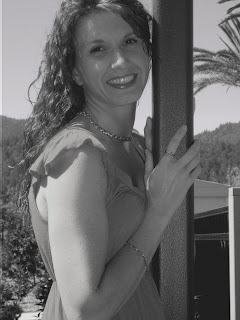 PENNY DAWN
Do I write under a pseudonym? I suppose I do. However, the name on the spine of my books is on my birth certificate, on my passport, and I'm sure it will be on my death certificate, too, so it doesn't often feel like a pen name at all. I write under my first two names, leaving my Catholic names and my last name out of the limelight. My reasons for doing so are two-fold, although both circle around the genre in which I write:

First, I write erotic fiction. I don't see any reason why my baptismal and confirmation names need to be involved in something sexy. In that vein, why should I use the name I was given at the altar of St. Gilbert Catholic, when I was married? Marriage is a sacrament, and like baptism and confirmation, we receive names for performing the rites involved. Therefore, I omit these names out of respect for my faith--seeing as my fiction doesn't quite jibe with much of what I learned in Sunday school. While I'm Penny Dawn S*****-T***** S****** in other facets of life, I am Penny Dawn when writing erotica. Think Clark Kent and Superman...or at least Madonna and Madonna Louise Veronica Ciccone.

Second, while I cherish my privacy (and I'm leery of stalkers, but that's another story), I'm also proud of every word I write. I don't mind if my neighbors know that Penny Dawn of erotica is really PDSTS of the PTO. But someday, my daughters, ages 7 and 9, might mind. They ought to be awarded the opportunity to decide how involved they want to be in the publishings of my alter ego. Maybe they'll be embarrassed to tell their high school boyfriends that their mom writes erotica. Maybe they'll be proud. I don't know how they'll feel, but they deserve the chance to decide for themselves. I'm raising daughters with strong voices, but my genre falls under harsh criticism. My decision to write erotica has nothing to do with my girls, so they shouldn't have to defend me or my work, if they don't want to do so.

BIO
Penny Dawn is the author of seven novels, including Measuring Up, Rolling in Clover, and Ancient History, seventeen eBooks, and countless poems and trade articles, including "eFabulous: Publishing in a Paperless World" for Many Genres, One Craft, edited by Michael A. Arnzen and Heidi Ruby Miller. Penny teaches her craft at two colleges in the Chicago suburbs, volunteers at elementary school writing centers, and edits the work of hopeful writers through The Calliope. When she isn’t writing, or teaching others to hone their ability to do so, she immerses herself in other passions: parenthood, the discipline of dance, home improvement, and her yellow lab. You can visit her online at http://www.pennydawn.com.