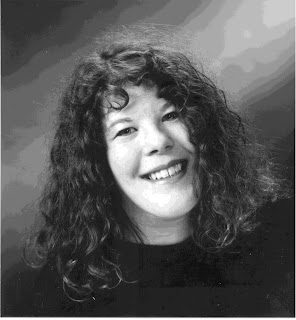 ANNE HARRIS
Somewhere around 2007 or so, I bifurcated. That's not as disgusting as it sounds. Up until then I had enjoyed a modest career as a science fiction and fantasy author under my real name, Anne Harris. But a number of circumstances coincided that led me to stop writing under that name, and reinvent myself under not one, but two new pseudonyms.

I had a young adult science fiction novel, Libyrinth, under consideration with my longstanding publisher, Tor. My editor loved the book. The problem was my sales history. My previous books, though well-reviewed, were not runaway bestsellers, and I was beginning to experience the dreaded Death Spiral, wherein booksellers order increasingly fewer and fewer of your titles, and sales diminish accordingly. I was asked to adopt a pseudonym so that Libyrinth could be presented to the buyers as a debut title from a new author, thus separating it from the handicap of my past numbers and hopefully inciting larger orders. That's how Pearl North came into being. As to how I settled on that particular name, that's another story and you can read about it here http://heidirubymiller.blogspot.com/2010/11/paths-to-publication-pearl-north.html (along with a more detailed and grisly account of the Death Spiral.)

But that's not all that was going on in my career at that time. The muse is a law unto herself, and I had found mine in yaoi manga, slash, m/m romance--pretty much any genre you can think of devoted to men falling in love with other men. For my copious thoughts on what the hell that's all about, you can check out the Why We Like It http://www.friskbiskit.com/why-we-like-it category on my blog. For now, just take my word for it that I had seen the light and there was no turning back. Unfortunately, many of those around me were less than entranced with this exciting new direction in my work. In particular, the reluctance of my agent and of my editor at Tor constituted real stumbling blocks to my pursuit of creative fulfillment. Maybe some authors would have obediently shelved their plans for world domination through boylove in favor of sane, commercial pursuits. But I've never had that kind of self control. One day it dawned on me that I didn't need anyone's permission to write whatever I wanted. At that moment, adopting the pseudonym Jessica Freely for my m/m work seemed blatantly obvious. Since then, I've published nine m/m erotic romance novels, novellas and short stories, primarily with epublisher Loose Id. I'm working on a new one right now.

So that's it. That's the story of how Anne Harris became Pearl North and Jessica Freely.