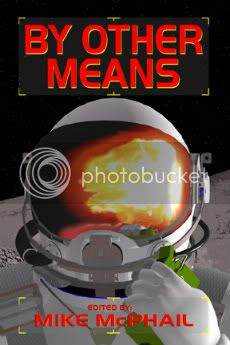 You know, I first got published through pure, dumb luck. I posted some of my work on a personal home page and someone saw it. They sent me an email and told me to get in touch when I was done. That focused me, gave me a direction, and woke me up to the fact that I was actually writing a novel. Though I ultimately (two years later) contacted them, and they did contract and publish my first novel, it wasn't a glowing triumph. They didn't edit, I didn't promote in advance as I should have (mostly because I had not clue). The only thing that publisher did for me--beyond actually getting my foot in the door--was two things: they sent out review copies anywhere I asked them to as long as it was a viable and active site, and they got me invited to my first convention.

From there, it was mostly a matter of learning as I went, which lead to the insanity of editing anthologies, selling books at conventions, and promoting, promoting, promoting! Being an author is more than just writing. Authors need to build on what they've started: networking, publishing more work in both short and long form if they are able to write both, finding promotional and publishing opportunities on the web and in person. I put twice the effort into promoting what I've already done than I do writing. And don't think that once a book is out and you have another publication on the way that the old one should be forgotten. Continue to promote everything you've done, and more importantly, make 'yourself as an author' the primary focus of most of your promotions so that you establish yourself as a "brand" so to speak. That way they remember you and not just your books.

One of the main ways I keep my name out there while I'm waiting for my novels to be completed and published is to participate in anthologies. Right now I'm focusing on science fiction and military science fiction, switched up with faeries and steampunk. My newest published work is the story "True Colors" in By Other Means - book four in the award-winning Defending the Future anthology series, by Dark Quest Books. (ISBN: 978-0983099352) Thanks to the caliber of authors who contribute to the series my work has receive much more attention.

Award-winning author Danielle Ackley-McPhail has worked both sides of the publishing industry for over fifteen years. Her works include the urban fantasies, Yesterday's Dreams, Tomorrow's Memories, and The Halfling’s Court: A Bad-Ass Faerie Tale. She has edited the Bad-Ass Faeries anthology series, and No Longer Dreams, and has contributed to numerous other anthologies and collections, including Dark Furies, Breach the Hull, So It Begins, Space Pirates, Barbarians at the Jumpgate, and New Blood.

She is a member of The Garden State Horror Writers, the New Jersey Authors Network, and Broad Universe, a writer’s organization focusing on promoting the works of women authors in the speculative genres.