1. Which of your characters is your favorite?
My favorite character is Ladyhawk Demiurgae, a.k.a. Victoria Woods, who is the heroine of my current work.

For years I refused to write a story with her as the main character because I was embarrassed. She is not only a character I made up, she is a character I played in a roleplaying game—who was based on me. This seemed extraordinarily vain to me.

Then, about a year ago, I realized that I had played many roleplaying characters. I had even played four or five based on myself (i.e. in a game where you start out playing yourself in the modern world and then strange adventures happen to you.) Most of them did not stand out to me as preferable to any other character…just this one. So, I realized that it wasn’t just because this was my character that I liked her so much…she really was interesting and delightful.

So, I caved and started writing about her, and the project, which I had been having trouble with for over ten years, suddenly came to life.

I like her because she is relentlessly cheerful, even when facing enormous odds. She is convinced that good will triumph, despite all evidence to the contrary. And she insists on putting her moral standards as high as possible…and still saving the world. This was what made the character so much fun to play…the great amount of thought necessary to figure out not only how to solve the problems but also how to do it without violating an enormous slew of moral convictions.

She is not a perfect character by a long shot. She often slips up…but that just makes her more interesting.

4. What else can you do besides write?
Mainly, I return to my secret identity as a mom. I have four children: a fifteen year-old princess who grew up as an orphan in China and three boys. My daughter has been with us about a year and a half now. She is finally speaking enough English to make friends. She is great fun and a joy. My sons are ages 8 to 12. One does not talk. The other two talk a great deal and are very interested in games, books, roleplaying games and movies.

At the moment, the great sorrow in my life is that out of these four children, not a single one can read English well enough to read a novel. However, we’ve seen some really wonderful progress this year. I’m very hopeful. Maybe someday they will all read.

8. Where do you find your inspirations to write?
Roleplaying, prayer, and skating. A great deal of the ideas I use come from our long-running roleplaying game, or are derived from it. But I also try to remember to pray before I sit down and write. I feel this brings a kind of clarity…or I’d like to hope so.

I also try to go skating (rollerblading) once or twice a week. This is a great time to explore ideas, work out scenes, pray quietly, or do whatever I mentally need to do. (I should add: skating outside is great for praying quietly. Recently, I’ve been skating at a rink with music. Not so good for quiet but great for thinking up dramatic scenes.)

11. What kind of music speaks to you?
I like a great deal of music--almost all kinds. When I am entirely alone, I sometimes secretly listen to Classical. Recently, I hear a lot of Christian Rock because that is what the boys like. I also like theme songs from anime, which I find to be cheerfuller than a lot of other modern music.

Before You Tube, I never listened to music while I wrote. Now, I can find the perfect song I’m in the mood for and play it over and over. So, my writing projects now have theme songs.

This has the interesting effect that A) playing the related song sometimes helps put me in the mood to write, and B) some songs are now so strongly associated with certain projects that I can no longer play them if I am working on something else. (This does not happen all the time, but it has happened.)

12. Do you outline your stories or do they just take you along for the ride?
I personally believe that there are three modes, not two. One is outlining. The second is just going with the flow. The third is listening to the muse…outlining when it comes to you to do it and not when it comes not to. I think this third is different than just winging. It takes hard work and a great deal of trust.

In general, though, I find that I cannot outline something until I’m at least halfway through. If I do it before that, I use too much human reason and not enough muse. The ideas become too rigid, and the project flounders. After a certain point, however, the whole thing seems to come together logically. After that, I find it useful to outline, to make sure that I don’t overlook a plot thread.

I love the process of writing and discovering what is going to happen. It always feels to me as if I’m remembering it or rediscovering it. As if it has been out there all along, and I’m just waiting to find it.

15. Do you still watch cartoons?
Indubitably! We love cartoons. My husband (sf/fantasy writer John C. Wright) and I watch them with our children, but that is just an excuse. We also watch them without the children. We love both Disney cartoons and anime. Avatar: the Last Air Bender is a favorite of the whole family. My husband and I also do an anime viewing night with a friend. Currently, we are watching One Piece.


L. Jagi Lamplighter is a fantasy author. She has published numerous articles on Japanese animation and appears in several short story anthologies, including Best of Dreams of Decadance, No Longer Dreams, Bad-Ass Faeries, and the Science Fiction Book Club’s Don't Open This Book.

She recently sold her first trilogy, PROSPERO’S DAUGHTER, to Tor. 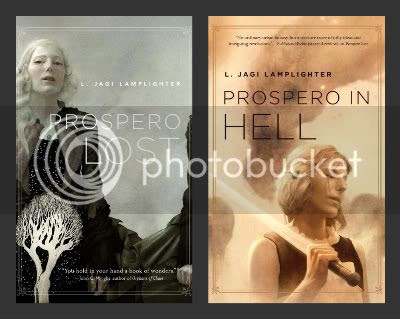 The first two volumes: Prospero Lost and Prospero in Hell are currently in stores. The last volume, Prospero Regained comes out in September of 2011.

When not writing, she switches to her secret identity as wife and stay-home mom in Centreville, VA, where she lives with her dashing husband, author John C. Wright, and their four darling children, Orville, Ping-Ping, Roland Wilbur, and Justinian Oberon.