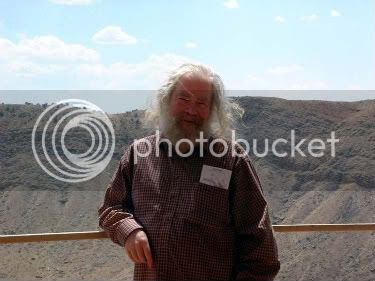 2. Tell me about your travels.
My biggest adventure has been, after 50 years of living in my native UK (I'm originally a Scot), to come and live for the past 12 years or so in the US -- all the fault of my beloved American wife Pam. The most exciting bit of traveling we've done since then, aside from regular trips to see family and friends back in Blighty, was a few years ago, when the World SF Convention was held in San Jose. We decided it'd be fun, rather than fly there from home in NJ, to drive both ways -- live our own road movie, as it were, complete with the kind of motels that have malfunctioning neon signs outside them. The adventure was made even more special because, on hearing we were planning this, a very good friend of ours, the Slovakian artist Martina Pilcerova, asked if she could come along for the outward journey, since it had always been her dream to go by car across the US. By the time we got to San Jose we were all sort of achy from the amount of laughter that had been going on.

The pic I've supplied of me was taken by Pam when, on the way back home, we stopped for an afternoon at the Arizona Meteor Crater -- something I'd wanted to see ever since, as a seven-year-old stuck at home from school with the flu in Aberdeen, Scotland, I'd come across a photograph of it in a book. It had been a long journey.

5. Who are you reading right now?
I'm reading a string of British crime novels -- Rendell, James, Robinson, Bingham, McDermid, Walters, Rankin. Until about a month ago I'd spent the best part of a year reading only for research -- for my upcoming (Fall 2011, Prometheus, plug plug plug) book Denying Science and for an essay on time-travel fiction for an academic book -- so I've really been enjoying the experience of reading just for pleasure. The fact that I'm reading all these Brit crime novels is that, all the while I was reading for research, I was promising myself that the very first book of my "freedom" would be the Ian Rankin novel I bought last Spring and hadn't been able to read at the time, Exit Music. And when finally I did get to it I enjoyed it so much that . . .

I've interspersed these with a few ebooks I've been reading for review purposes (and also to see if I'm as yet interested in getting myself an e-reader): Eric Brown's A Writer's Life, Keith Brooke's collection Memesis, Kaitlin Queen's One More Unfortunate.

11. What kind of music speaks to you?
Most kinds. I'm not much into opera, with a few exceptions. I quite enjoy jazz when I hear it, but I don't actively seek it out. Other than that, my taste is the usual mixture of rock/pop/folk/classical, although the rock and pop and folk aren't necessary anglophone; I especially like chanson francaise. For the past couple of years or so, though, most of the music I've been playing has been classical, not just the genuinely classical stuff but also "new music" -- a fresh development for me, because for a long time I didn't much like modern music.

12. Do you outline your stories or do they just take you along for the ride?
I usually have a pretty clear idea of where the story's going to go, although most often I won't be certain at the start of how it's going to get there. I don't like to know in advance too many of the details, because the exercise might end up being sort of like painting by numbers; also, I think that if I'm excited and surprised when things happen in the story, maybe some of that freshness of emotion will get across to the reader.

And, yes, there are times when I just start writing with no clear idea of where the journey's going to take me. That can be fun. It can also be disastrous. I've built up quite a collection of unfinished stories that are waiting for me to work out how to write the rest of them!

14. Who are the biggest influences on your work?
I think the answer to that depends on whatever it is I happen to be writing at the time -- I've written everything from space opera and high fantasy to reference nonfiction. In some instances it's obvious: my 2008 fantasy novella The City in These Pages, for example, is not so much influenced by Ed McBain as a homage to him, and overall I'd say noir, in both written and screen form, has had a growing influence on my fiction. That's not to imply I write much that's actually in that genre (although I'm planning a major nonfiction book on film noir). Recently I wrote for the anthology Dragon's Lure a story that I'd say was influenced by Henry Kuttner. And so it goes. At the moment my default mode, as it were, in fiction is kind of slipstreamy, and there I'd say my influences are people like John Fowles, Christopher Priest, and Carlos Ruiz Zafon.

What I should really be saying, of course, is that I'm an entirely original voice -- no such thing as influences at all.

15. Do you still watch cartoons?
Yes, and I write about them too. I wrote three editions of Encyclopedia of Walt Disney's Animated Characters plus, some while later, another big book called Masters of Animation. I'm hoping soon to get the chance to do a new edition of the latter. Aside from updates and the like, in the ten years or so since I wrote it a number of good new animators have come onto the scene. Also, the original edition had a design that seemed to me to clash with the content, so I'd like any new edition to reflect better what the text is all about.


John Grant is author of some seventy books, of which about twenty-five are fiction, including novels like The World, The Hundredfold Problem, The Far-Enough Window and most recently (2008) The Dragons of Manhattan and Leaving Fortusa. His “book-length fiction” Dragonhenge, illustrated by Bob Eggleton, was shortlisted for a Hugo Award in 2003; its successor was The Stardragons. His first story collection, Take No Prisoners, appeared in 2004; its ebook reissue in 2011 was an Amazon.com bestseller. His anthology New Writings in the Fantastic was shortlisted for a British Fantasy Award. His novella The City in These Pages appeared in early 2009 from PS Publishing; PS will publish another of his novellas, The Lonely Hunter, in 2011.

In nonfiction, he coedited with John Clute The Encyclopedia of Fantasy and wrote in their entirety all three editions of The Encyclopedia of Walt Disney’s Animated Characters; both encyclopedias are standard reference works in their fields. Among his latest nonfictions have been Discarded Science, Corrupted Science and Bogus Science. He is currently working on Denying Science (to be published by Prometheus in 2011), on a book about film noir, on the artist/illustrator entries for the massive online third edition of The Encyclopedia of Science Fiction, and on “a cute illustrated rhyming book for kids about a velociraptor”.

As John Grant he has received two Hugo Awards, the World Fantasy Award, the Locus Award, and various other international literary awards. Under his real name, Paul Barnett, he has written a few books (like the space operas Strider’s Galaxy and Strider’s Universe) and for a number of years ran the world-famous fantasy-artbook imprint Paper Tiger, for this work earning a Chesley Award and a nomination for the World Fantasy Award. His website is at www.johngrantpaulbarnett.com.
author interview heidi ruby miller heidi's pick six john grant paul barnett