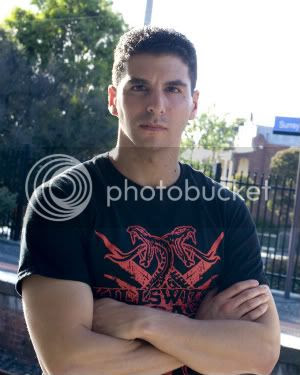 2. Tell me about your travels.
I have lived in Africa, Australia and North America, I 'commuted' to Europe for about 15 months for work, and I've visited Asia several times. I have nightmares about airports now.

4. What else can you do besides write?
Ju jutsu. Also, computer programming and map folding. I'm a semi-competent illustrator and a terribly bad guitarist.

8. Where do you find your inspirations to write?
Everywhere. At work, on the road, in the newspaper, in scientific journals, guitar magazines and other people's books. Sometimes my stories come directly out of dreams. I wake up with a story in my head--not quite fully formed but probably 80%. Inspiration has never been a problem for me.

11. What kind of music speaks to you?
Guitar rock, baby. Not every little subgenre of it, but a fairly wide variety of them. Having said that, the older I get the more of a metalhead I have become--I think because metal is one of the few areas of popular music where musicianship is valued over marketing dollars. Those bands can play, and they play hard. I'm also becoming more and more interested in the Blues, for similar reasons.

12. Do you outline your stories or do they just take you along for the ride?
Depends on the story. If it's a comic pitch you more or less have to outline the story if you're going to sell it, but I try not to nail down every beat before I start writing--that ruins the fun of it. Usually I know where a story is going without a formal outline, although sometimes I just start on page one and see where it takes me. Sometimes I write out of sequence and then go back over it, filling in
the gaps. Every story is different.

Jason Franks grew up in South Africa and Australia. He writes source code, prose and comics for a living. He is the author of the graphic novels The Sixsmiths and McBlack, as well as numerous shorter pieces in prose and comics. Franks' work has appeared in Deathlings, Assassin's Canon, Bad-Ass Faeries, Tango, and other places. He is once again based in Melbourne, Australia.
Posted by Heidi Ruby Miller at 8:00 AM