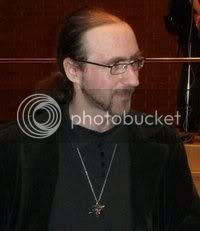 1. Which of your characters is your favorite?
That's a good question. I've got quite a few, but the character that's really my favourite is in a yet unpublished novel that's sort of on hiatus. He turns up in the webcomic that I do with my wife, Kalon Rhadon, an Inquisitor for the Church of Progession in a fantasy/steampunk setting that's based around a Renaissance kind of theme. Kalon starts out as a very no-nonsense, trained all his life by the church kind of character but develops further along the way and becomes much more than the sum of his parts. He plays a major role in events as a bad guy but when the church turns on him, he decides enough is enough and steps away.

You can find the comic here: http://hellionsart.com/Wyrden/. It can get NOT SAFE FOR WORK, so there's a warning.

2. Tell me about your travels.
I'm not as widely traveled as I would like to be: I have been to France, Germany, Austria, Vienna, Scotland and Bulgaria. Bulgaria was extremely interesting since we ended up in Sofia working on a game called Knights of Honor (for the PC) on behalf of Sunflowers and Black Sea Studios. Both myself and Gill (my wife) were over there helping them with their English text for the game and some design elements. It was a very fun couple of weeks where we learned a lot about that culture and made a bunch of interesting new friends. I'd very much like to go to the US and attend one of the big gaming cons though, like GenCon or even E3...perhaps one day!

8. Where do you find your inspirations to write?
My inspirations for writing can come from numerous sources. I might hear someone in conversation and think, you know what? There's a story in here somewhere. I can sometimes listen to a piece of music and I'm away in that writer's zone that basically helps me construct a tale. Sometimes it can just be a small tag line on something and I think, hmmm, now there's a basis for a cool short story. In the case of "Snow and Iron" for Bad Ass Faeries 3: In All Their Glory it was a line from the film Legend that talks about mortal hearts compared to those of the fae.

11. What kind of music speaks to you?
I am very big on soundtracks, but I like a lot of music. My tastes range from heavy metal, light rock, through to classical, jazz and so on. I suppose you could say that my music list is very ecclectic. Recently I've discovered bands like Ghoultown and Clutch (Clutch being what they call: Stoner Rock). Ghoultown is an odd mix of rock and the wild west.

12. Do you outline your stories or do they just take you along for the ride?
Do I outline my stories? I do sometimes, it depends on the mood I'm in and what I'm currently writing for. There are times that I'll have this crazy idea like I did with "Snow and Iron," and I need to get it down without waiting to write an outline. Then there are times that I'll dip into my rpg designer roots and construct a story or world bible with everything that I need to create numerous tales in a particular setting. I love world building.

15. Do you still watch cartoons?
I do indeed still watch cartoons. I love some of the new animated shows and I am a huge fan of Kevin Conroy et-al in the original Batman Animated series and Justice League. I also have a soft spot for Samurai Jack and the first couple of animated Clone Wars series by the same people.

Darren W. Pearce was born in 1969, in the West Midlands and since a very early age has always been interested in writing. He was immersed in fantasy and science fiction by his parents. He read virtually everything he could find, from Storm Constantine to Michael Moorcock, Tolkien, Adams and beyond. At 10 he was given the old red box D&D set by his parents and that started his downward spiral into roleplaying games. Little did Darren know that in 2000 he would get several opportunities that would see him work on computer games like Savage, Knights of Honor and Breed.

Let alone working in the roleplaying game industry and writing short stories and articles for magazines. He now lives somewhere in the West Midlands with his wife Gill, 4 cats and writes regularly for the likes of Dark Quest Games, Mongoose Publishing, Cubicle 7 Entertainment and has many other irons in that fire.

He really wants to write a Doctor Who novel someday, but contents himself working on the Doctor Who: Adventures in Time and Space RPG for Cubicle 7 for now. He has also written 2 books and a bonus adventure with Lone Wolf author: Joe Dever. Darren also works as the co-editor of a popular UK based online game magazine, Games Xtreme, where he writes articles and news/reviews.

He also has a couple of novels in the pipleline and at least one RPG setting (or two) for 2011. He has a number of short stories in various anthologies and 2011 will see even more!

Currently Darren works with Neal Levin and together you can find them in such anthologies as: