1. Which of your characters is your favorite?
Insanely difficult question. My problem is, I love them all when I'm working on them. I have to get caught up within their minds and souls, or I can't write them very well. Jack Hagee (hardboiled P.I., my first series character) is the character nearest to my soul. He is my voice. We believe all things equally. But, Teddy London, Piers Knight, Rocky and Noodles, the Monkey King, Lai Wan, the Domino Lady, Kolchak the Nightstalker, Batman ... there are so many I love to write. I had to tally all the characters, mine or those owned by others, that I have worked with, and the figure topped 100. Many, like the Spider, Wezleski, Inspector Legrasse, the Punisher, et cetera, that I dearly loved working with, I can still shove out of the top slot. But, those named above ... they all hold a special place in my heart because, I suppose, they all represent a different facet of my soul, mind, personality, whatever, which I wish to capture on paper. I 'm honestly not copping out here. It's just the best I can do.

2. Tell me about your travels.
I have seen every state in the continental union. I have viewed the Grand Canyon and the Corn Palace, the arch in LA and Fallingwater in PA. I have gone to Yellowstone and Yosemite. I have walked across hardened lava flows and ancient fossil beds. I have been to Crater Lake, and the 1000 Lakes, to the Statue of the Jolly Green Giant and the Statue of Liberty. Disneyworld and Disneyland and Silver Springs and the Bok Tower. The Painted Desert and the Bad Lands. Mt. Rushmore and plenty more.

Outside of the states I have climbed on the top of the Eiffel Tower and on the pyramids of Mexico. I have played the slots in Macho and with children in the gardens of Versailles. I have eaten dumplings at the World's Greatest Dumpling House in Xian and Peiking Duck in Peiking. I have driven in the desert at night so I could admire the stars and have visited James T. Kirk's hometown. And, since that one brought me back to the states, I guess that's as much blather as I should throw your way on this one.

3. Coffee, tea, or milk?
Coffee and tea, but coffee with milk and tea with lemon.

4. What else can you do besides write?
I'm a great cook. I'm not a chef, there's a difference. Let 10 people drop in, and I can whip something up. I'm terrific with basic, solid foods--garlic bread and pasta, beef stew, fried rice, pork chops and mashed potatoes, scallops wrapped in bacon ... that kind of stuff.

I'm one of the world's great packers. I have something strange in my head that sees everything geometrically. I can find space where no one else can. I can rearrange items in an area and make more space without throwing anything away. It's just a weird gift.

I'm also a pretty good gardener. I hate grass, but love gardens. I miss having one with which to play.

12. Do you outline your stories or do they just take you along for the ride?
Outlines are for those who like to do double the work. I have always hated them, and when forced to use one, I know the work suffers. Just not for me.

15. Do you still watch cartoons?
Good God, yes. Anime of all kinds, King of the Hill, Justice League and Batman ... yikes ... this list could get really long. Yes ... I "still" love cartoons.


CJ Henderson is the creator of the Piers Knight supernatural investigator series, the Teddy London occult detective series, and more than a dozen others. He has written some 70 books and/or novels, hundreds of short stories and comics, and thousands of non-fiction pieces. 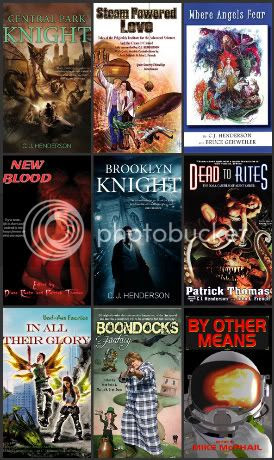 His work has been published in some 13 languages. If you actually want more information on this complex, and rather odd fellow, a trip to www.cjhenderson.com will give you facts and news about him, a sampling of short stories to read, and a store in which you can waste what little money the government has allowed you to keep.
brooklyn knight central park knight cj henderson heidi ruby miller heidi's pick six