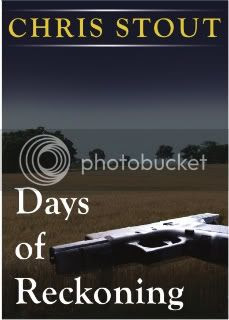 Days of Reckoning by Chris Stout

My path to publication started out in the traditional manner: I networked. While I was working on my MA, I met and became friends with two editors who owned their own small presses. So my first two sales were short stories, which appeared in the anthologies Thou Shalt Not (Dark Cloud Press – 2006) and Sails and Sorcery (Fantasist Enterprises – 2007). After that quick start, things came to a screaming halt. My novel Days of Reckoning, which received solid reviews from peers and mentors at Seton Hill University, failed to attract the attention of any agents. One agent sent it back with a flyer promoting his own book on how to land an agent, so at that point I consigned it to the “never gonna sell” file.

A few things happened to bring it back to life. First, I opted to continue at SHU and pursue an MFA in Writing Popular Fiction. At least with that degree, I would have a better chance of landing a teaching position. During the June 2010 residency, I attended a talk by David Morrell, and heard about how Amazon was offering a 70% royalty option to authors who chose to self-publish for the Kindle. I filed this information away for a few months.

Being in a community of writers re-ignited my interest in trying to get into print again. While I was cleaning up a new novel and searching for agents to whom I might submit, I came across my notes from Dr. Morrell’s talk. One of the authors he recommended was JA Konrath, so I looked up Mr. Konrath’s blog and read about his journey from traditional print publishing to e-book self-publishing. As I was studying his blog, Barnes and Noble announced that they were launching a self-publishing platform called PubIt!. Add to that mix the fact that Apple had launched the iPad and iBookstore, and suddenly the largest retailers were all offering strong royalty rates and platforms where authors could sell their work directly to consumers.

So I had a completed, edited novel that had failed to find a home in traditional print. And I had venues available to sell it myself without having to sink thousands of dollars into printing costs. I would need to do another round of edits to make sure everything was up to date in my book, and also to reformat it so it would be compatible across several different platforms, but that seemed like a lot more fun than sending out queries, so I took the plunge.

So here I am! My novel Days of Reckoning is a contemporary action thriller. It centers on Miranda Leider, a good cop with a violent past. Her brother is found dead, and Miranda sets out to prove that it's not a suicide. As she investigates on her own, she uncovers a conspiracy that reaches all the way to the top of her department. Trusting no one, Miranda goes rogue. With her friend and partner Detective Sam Connor hot on her trail, she hunts the conspirators and anyone else who had a role in her brother's death.

and Nook:
http://search.barnesandnoble.com/Days-of-Reckoning/Chris-Stout/e/2940012715036/?itm=1&USRI=chris+stout, at the price of $2.99. The equivalent of 30 printed pages can be downloaded as a free sample from either platform. The iBooks version should hopefully be available before 2011.

In the meantime, I am still editing two more novels, and in the middle of writing the first draft of yet another. I don’t yet know whether I will publish them myself or try to go the traditional route. But at least I have the experience of trying to sell and market in both ways. Since I still hope to teach when I finish the MFA, I think those experiences will be valuable in the classroom.