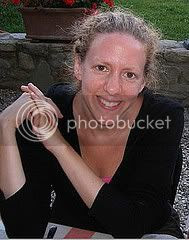 Robin Wasserman
HEIDI'S PICK SIX
1. Which of your characters is your favorite?
This question is harder than I thought it would be, but I think it's got to be Harper Grace, the main character in the Seven Deadly Sins series. Harper is the first real character I ever created (at least the first one who ever got to star in her own book). Several years ago, back when I thought being a writer was just a ridiculous fantasy that I would eventually have to forget about, her name popped into my head, attached to a character: a spoiled, insecure girl who expects the world to give her what she deserves -- but deep down, isn't sure what that really is. The world of the Deadly Sins -- the setting, the other characters, the plot -- all unfurled from that one character. And that eventually became my first book series. So I guess I owe Harper Grace my career!

2. Tell me about your travels.
Last May I spent a month (ie, best month of my life) in Paris. I rented an apartment on the left bank, a couple blocks away from the river, and spent my time writing in cafes, getting lost on purpose (and by accident), eating large quantities of crepes, Nutella, and croissants, picnicking along the banks of the Seine, and understanding about 1 in 100 things that anyone said. I used to think that New York, where I live now, was the greatest city on earth. It turns out I was wrong.

3. Coffee, tea, or milk?
Milk, but only if it's *chocolate* milk. Preferably the kind you get at a diner, when the chocolate syrup is so thick you have to stir it in yourself, and even then it still coats the sides of the glass.

4. What else can you do besides write?
Alas, nothing that anyone would pay me to do, so let's hope this writing thing works out. But I do have other...um, let's call them talents. I can: play the piano, juggle three balls for a minute or two, yo-yo, cook a mean baked ziti, recite most of the state capitols and all of the countries in South America from memory, speak French (a little), speak German (a very little), and explain the theory of relativity and the Copenhagen Interpretation of quantum mechanics.

9. Food you could eat everyday.
Chips and salsa and some homemade guacamole. I think I could also eat a fresh tomato and mozzarella sandwich every day for a few years before I got bored. (Actually, I did eat a peanut butter sandwich for lunch every day for eleven years -- ages 3 through 13.)

10. Are you into sports or other physical activities?
11. What kind of music speaks to you?
12. Do you outline your stories or do they just take you along for the ride?

13. Celebrity crush.
Robert Downey Jr.'s been at the top of that list for a while now, but Neil Patrick Harris is making a run for second place. (If you saw him in Joss Whedon's "Dr. Horrible's Sing-A-Long Blog," you know why.) However -- Nathan Fillion, Hugh Laurie, or guy-who-plays-Chuck-on-Gossip Girl, if you're reading this? You should also feel free to call me!

Robin Wasserman grew up in suburban Philadelphia. Every day she wished she would get a dog, get better hair, and grow up to be a writer who lived in New York and ate pasta for dinner every night.

She never got the golden retriever, but the rest of it came true (even the part about the pasta, at least most nights).