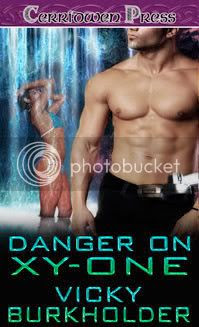 Danger on X-Y One by Vicky Burkholder

I’ve always been someone who made up stories, and even wrote some of them down. I started sending them out a long, long time ago, but didn’t get really serious about my writing until my kids were well into high school. I did win a few contests here and there, but, again, nothing serious. But I continued to write. Mostly papers for my Master’s degree and then as a technical writer for a small computer company. From there, I moved up to policy and procedures manuals for organizations and government-type places. And yes, it is as boring as it sounds.

Then I got a job as a journalist for the local newspaper. I specialized in human interest stories – you know the type – “New Vice-Principal at the High School”; “Students Put On Spring Play” – more interesting than policy and procedures manuals, but not where I wanted to be. In the mean time, I continued to write my fiction stories and started expanding them into books.

My next gig was as an editor for a now-defunct e-publisher. (Actually, I’ve been with four – three of which no longer exist). After I edited over three-dozen novels for them, I submitted my own. The Path to Orenda Clu was picked up and I began my journey as a novelist.

It was a short-lived trip as the company closed less than a week after my book came out. I spent the next four years shopping it, and other novels I’d written – around to other places. And I continued to study and learn the craft. Finally, Cerridwen Press picked up Akashan’te, a book based on Orenda Clu. And a week later, they accepted my futuristic novel Prime Time.

And the rest, as the clichéd saying goes, is history. I now have three books with Cerridwen Press, all e-books. Two, Prime Time and Danger on Xy-One, are futuristic romances while Akashan’te is a fantasy novel. I also have a book out with Draumr Publishing – The Shape of Love. This is a contemporary shape-shifter anthology of which I am one of three of authors. It was incredibly fun to write and we plan to do an anthology each year with them. They come out as both e-book and trade paperback at the same time.

In the meantime, I continue to write, mostly fantasy or futuristics, and am excited to be able to hold a book in my hand that has my name on it.

My advice? Do not ever give up. Ever. Keep trying. Keep learning. Keep writing. If you quit, it’s a sure thing you’ll never be published. But if you keep trying, who knows? One day, you might have that thrill of holding a book of your own too.

DANGER ON XY-ONE: Aleksia Matthews is an asteroid assayer who would like nothing better than to be left alone. Her life is soon turned upside down when a band of ruthless pirates attack her ship. She manages to escape, but fears the worst for her brother. Ali swears revenge. Although well-trained by Fleet Security, she knows she can’t do the job alone. When she literally runs into a stranger, Jason Cole she knows she has met the perfect partner—in more ways than one. Special agent and Bounty Hunter, Jason has spent the past year tracking the pirates who killed his brother Zack and Zack’s family. He’s always one step behind, too late to help the victims. There are never any survivors—until now. It is up to him to keep Ali alive and out of trouble until the gang can be captured, and maybe longer.

THE SHAPE OF LOVE: WHO’S YOUR ALPHA? While growing up, Sunny Clark never felt like she fit in with the others in her school. She was always a little overweight, always a little too independent, and a shape shifter. She was also in love with her neighbor, David Maxwell. But he was one of the in crowd, and she wasn't. When she returns for a reunion, many things have changed, but not her feelings for David. Unfortunately, the alpha female doesn't want Sunny around and sets out to make sure she knows it. But Sunny is no longer the shy little puppy she once was and the pecking order is about to change. 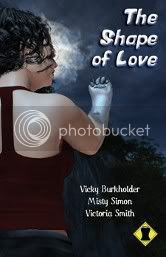 Vicky Burkholder's "Who's Your Alpha?" in The Shape of Love