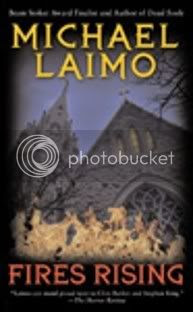 When I started, I wrote a ton of short fiction, and sent them off to small press journals. I published a few, but had a million rejections. But, I really enjoyed doing it, so I kept at it, and soon enough, had published a bunch of short stories, all horror (I was always a horror fan, so there was no other avenue for me here). I spent a year writing my first book Atmosphere, and went to a few horror conventions to see if I could get some tips from the some more experienced writers. I’d met quite a few great people, and knew that I’d found my niche. I attended a Stokers award banquet in NY, met with the Leisure Books editor, and pitched my book to him. After 2 years, he accepted it, and two years after that, it was published.

My current novel Fires Rising is also through Leisure. In Fires Rising, a church waits in darkness. It looks abandoned, forgotten. It has no congregation, but it is not empty. Under its floor, in a pit dug long ago, lies a wooden crate that was never meant to be unearthed. But the church is finally being renovated and workmen have found the pit. How could they realize what they have done? How could they know the forces they’ve unleashed?

Father Pilazzo is overseeing the renovation of the old church. His dream is to see it restored to its former glory. But his dream is becoming a nightmare. He’s begun to see horrific visions, unholy images of death and warnings of terrors to come. And within the church forgotten men fight to survive against impossible demons, while sides are drawn for the ultimate battle…

You can find reviews of Fires Rising at:
horror web
Horro World (scroll down to the third review)
nickcato
Horrow Review

And you can find me at my website: www.laimo.com and MySpace: myspace.com/michaellaimo.