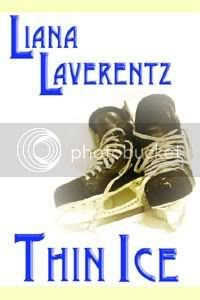 I finished Thin Ice for the first time seventeen years ago. It made the rounds of the traditional publishing houses, with no luck. After a few years, and after my first novel was published in 1993, I re-wrote Thin Ice from beginning to end, and tried again. This time I got glowing rejection letters, but they were rejection letters all the same. Finally my agent said, what you need to do is win some awards, get some name recognition. Then they’ll buy it.

So I put Thin Ice away, and moved on to writing several other manuscripts, one of which became Ashton’s Secret, released by Meteor/Kismet. But Thin Ice remained my favorite, and I wanted people to read it, so I started passing it around to friends in manuscript form in a three-ring binder.

One friend who read it loved it so much, insisted I needed to send it out again. And I mean insisted. But it had been nearly ten years since I’d last sent it out, and it needed to be completely revised again. The world had changed. For one thing, nobody had cell phones when I first wrote Thin Ice. I had to add them in. For another, Emily, my heroine, needed a very large car for a special reason, and they’d stopped making the car I had chosen for her. This was before the advent of SUVs.

So I had to go car shopping for her, which was great fun, actually, and sparked many a friendly argument with another friend, a car buff. Also, the hockey team Eric plays for was in Minnesota. When I originally wrote Thin Ice, the North Stars were the only NHL team in Minnesota. So I created the St. Paul Saints, to be their arch-rivals. But by the time I was sending out the manuscript a second time, the North Stars had moved to Dallas. Then, this last time I re-wrote it, the Minnesota Wild was in St. Paul, where my original team, the St. Paul Saints, had originated.

So I had to go back to the original concept of two teams in Minnesota who were arch-rivals, but this time my team was the Minneapolis Saints, instead of the St. Paul Saints. And in between, the national hockey league had added and moved teams and re-structured their divisions and added new Stanley Cup champions, and so all of that had to be re-written to reflect the most recent situation in the NHL.

It took about a year, but I eventually got it done. Right around that time, Rhonda Penders and RJ Morris were opening the doors of their new publishing venture, The Wild Rose Press, and it was one of those serendipitous moments in life. I knew Thin Ice had had no luck with traditional publishers, so I thought I would give The Wild Rose Press a try. They publish in both e-book and print formats, and if they bought it, my friends and family could finally stop reading the darn thing one by one from a three-ring binder.

I sent the manuscript in to Rhonda, explained that the manuscript hadn’t fit in very well with traditional publishers, and Rhonda said, “Great! That’s what we are all about.” Within days she offered me a contract, and I couldn’t be happier with the way things have turned out, both for Thin Ice, and The Wild Rose Press. Rhonda and RJ have been phenomenal to work with, and The Wild Rose Press has taken off like gangbusters. I am so pleased to be a part of such a vibrant and growing publishing house, and to know that Thin Ice has finally found the best home possible for it In The Garden.

Since then, Thin Ice has won two major awards, a 2007 New Jersey Romance Writers Golden Leaf Award for excellence in writing, and a 2008 EPPIE for Best Contemporary Romance. I have also published another novel with The Wild Rose Press, a contemporary romance with an element of suspense, Jake’s Return. In late 2008, The Wild Rose Press will re-release my first novel, Ashton’s Secret. 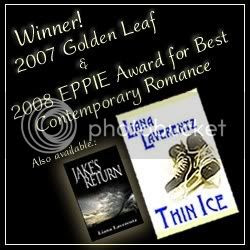