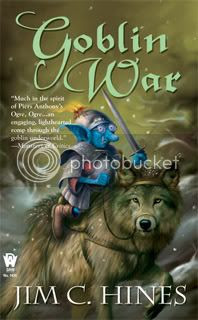 My path was a rocky one, to say the least. Things started out well. One of my early stories, "Blade of the Bunny," won first place in the Writers of the Future contest. They flew me out to L.A., put on a workshop with authors like Dave Wolverton and Tim Powers, and generally spoiled me rotten. I figured I was on my way, and rejection would be a thing of the past.

You may laugh now, if you want.

Years later, after collecting several hundred rejections, I wrote a book called Goblin Quest. I sent it out to the major publishers and some agents. No bites. So I started the next book. Then, about 18 months later, I was talking to an editor I had worked with who was now acquiring for a small library press called Five Star. I asked him if he'd be interested, sent the book, and voila -- he wanted it. I withdrew the book from the one or two publishers who were still sitting on it after 18 months, and life was good.

That was the plan, at least. The reality was that one publisher apparently didn't get my letter. After the Five Star edition came out -- 2.5 years after I had submitted the manuscript -- that big publisher made an offer on Goblin Quest.

I did what any rational author would have done. I panicked. The book was already out, but Five Star only does hardcovers, which meant the mass market paperback rights were still available and maybe this could still work! My friends kicked some sense into me and told me to talk to an agent, which I did. I ended up signing with Steve Mancino of JABberwocky, and asking him to help me fix this mess.

Steve did his best, but the deal fell apart. I grew very depressed and moped around the house feeling sorry for myself for about a month. Steve then kicked my butt and told me to write a second goblin book. He turned around and sold both books to DAW, for a better advance than the original publisher had offered.

It's not how I'd recommend breaking in, but it worked. On March 4, my third goblin book came out. Goblin War is a humorous fantasy about a nearsighted goblin named Jig and his pet fire-spider Smudge who find themselves dragged into a war between humans and monsters. We've sold three more books to DAW in a new series. Look for The Stepsister Scheme in January 2009.

You can find reviews for my goblin trilogy here and you can find me at my website http://www.jimchines.com or my blog http://jimhines.livejournal.com.