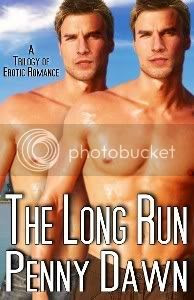 I'd been querying unsuccessfully for five or six years by the time I opted to obtain a Masters Degree in writing. At Seton Hill University, I learned that knowing how to write a good story doesn't mean much, if there is no market for what you're writing. It was during my time at SHU that I not only began to write for the market, but met invaluable resources who helped me to do so.(Leslie Davis Guccione is brilliant with romance markets.) I partnered with Alayne Adams (a.k.a. Jacki King,) who had won an erotica contest and was publishing eBooks. She sent her editor to my website, and within a few months, Amber Quill Press offered me a contract for my master's thesis, Measuring Up.

My path to publication involved persistence, a bit of luck, and who-you-know, but ultimately it was preparedness. I had an active website, as well as several manuscripts awaiting an editor's touch.

If you want to learn more about me and my works, please visit www.pennydawn.com or www.amberquill.com/AmberHeat/bio_Dawn.html.