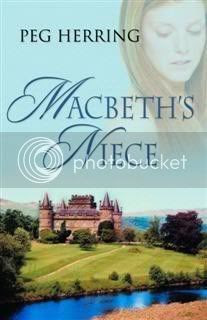 Once upon a time I was a high school English teacher. Somewhere in the 90's I took over the drama program at the school and had problems finding plays to perform that worked for us. We had HUGE casts, lots of girls, and no interest in anything serious. On a whim I wrote a play, then another, and another. When the second one was received with comments of "You should publish," I thought, "Why not?" and sent it off to three publishers. Two of them wanted it, and I concluded that this publishing thing was easy. HAH!

The next two plays took four years to find a home, and though there's been a fourth since then, I realized that my real love was writing novels. With my husband's blessing I took early retirement and began the quest for fame. (I'd already figured out that fortune is a very dim longshot.) I usually write mysteries, but a romance called MacBeth's Niece is what first caught an agent's eye. Luckily for me she was a helpful type who told me what was wrong with it, let me fix it, and then accepted the MS. Two years later, it hadn't sold, and she sent me a good luck email that I thought ended our relationship. That was okay, because I'd been accepted by another agent who was in love with my suspense novel, Shakespeare's Blood. A year later that agent admitted defeat. She loved it but couldn't sell it. About that time the first agent emailed wondering whether MacBeth's Niece was still available. Five Star was interested, but here I learned another lesson: they would publish in 2008, about a year and a half away!

MacBeth's Niece concerns Tessa, who is abducted from her uncle's castle by Jeffrey Brixton, a handsome and enigmatic spy. In the ensuing trials, Tessa struggles against ruthless outlaws, three witches, English soldiers, and the nagging whispers of her own heart. Here's a review: http://tinyurl.com/234y89.

These days I have one foot in romance and one in mystery. Shakespeare's Blood is a semi-finalist in Amazon's Breakout Novel Contest. (To download three chapters of Shakespeare's Blood, go to http://tinyurl.com/yt5we2. Then write a review (before Feb. 28), and enter to win cool prizes!) MacBeth's Niece has hit the bookstores. A foreign publisher is considering a third novel, Her Highness' First Murder, which finished in the top five in last year's Courtv's, "Search for the Next Great Crime Writer Contest." Where will it all lead? Not to fortune, in all likelihood. Not to fame outside the small community of those who love to read what I love to write. But if it leads to enjoyment for others that's good, because writing certainly brings enjoyment for me.

You can find me at my website www.pegherring.com or my blog http://morganmandelbooks.ning.com/profile/pegfish.