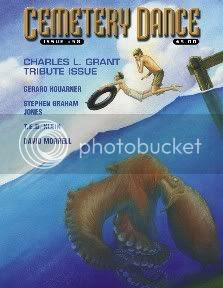 Hi there, I'm Ian Rogers, a writer from Peterborough, Ontario (that's in Canada). I write in every genre, but I stick pretty close to horror. I grew up watching horror movies, classics like Jaws and Poltergeist, and crap like The House on Sorority Row and the Friday the 13th movies. Then I moved onto horror novels — Stephen King, Dean Koontz, Clive Barker — and eventually decided that's what I wanted to do for a living. I'm not quite there yet, but I'm working on it.

My first major sale was to Dark Wisdom for a story called "The Tattletail." It's about a boy who acquires a demon in order to win his school's pet talent show. Since then I've sold several other stories to the likes of All Hallows, Bare Bone, and Not One of Us. But the one seems to impress people most is my sale to Cemetery Dance.

The story they bought, "Inheritor," is actually one of the first stories I ever wrote. It's about a man named Daniel Ramis whose father dies and leaves him the old family home. Daniel knows something is wrong, because his father told him the house had been sold years ago. He has good memories and bad memories about the house, none of which he really remembers clearly, but he feels an odd responsibility to go back and see what his father has left for him.

My sale to Cemetery Dance was definitely one of my career highlights to date. CD is one of the biggest horror fiction magazines — one you can actually find on newsstands (which can't be said about many other horror/sf fiction mags). They've published stories by many successful horror authors, like Stephen King, Dean Koontz, Douglas Clegg, and Poppy Z. Brite. I don't consider myself in their league, but it's still nice to see one of my stories in a magazine that has published the work of so many great authors. It makes me feel like I've actually achieved something.

Coming up next… Well, I've got several short stories due out in 2008. One I'm especially looking forward to is "The Dark and the Young," a 10,000-word story that will appear in the mammoth anthology Bound for Evil from Dead Letter Press. It's a collection of stories about evil books, and features new stories from authors like Lavie Tidhar, Jeffrey Thomas, and Gary McMahon, as well as classic reprints by Nathaniel Hawthorne, H.P. Lovecraft, and others. The book is going to be huge, and it also marks my first appearance in a hardcover book.

Another story I'm looking forward to seeing in print is "Camp Zombie," which, despite the title, is actually a literary tale about a camp for kids with sleep disorders. It will be published in an upcoming issue of Broken Pencil, a popular Canadian magazine "devoted exclusively to underground culture and the independent arts."

I continue to write short stories — I've got almost 30 currently sitting in slush-pile limbo — but most of my energy right now is going into my first novel. I don't want to say too much about it except that it's a dark literary tale, not supernatural, that takes place in a small town in northern Ontario. I hope to have it finished by the summer and be shopping it around for representation in the fall. After that, I have a straight-up horror novel planned.

I have a website where I talk about my progress (such as it is) in the publishing world. I also discuss books and movies, dish on what other writers are doing, and occasionally post photos I’ve taken of autumn landscapes, which is one of my hobbies. The website is located at www.ian-rogers.com.