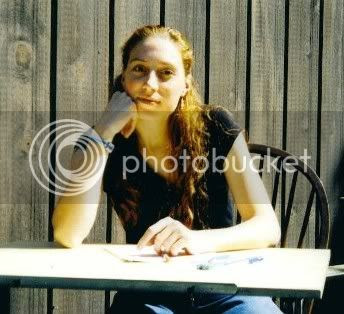 1. Which of your characters is your favorite?
Without a doubt that would be Tae, the main character of my thesis novel Sworn Sword. She is so tough and driven. She seems strong to everyone else, and she is, but on the inside she is hurting and lost. She's a complex character who you can't help but feel empathy for ... and it doesn't hurt that she can beat just about anyone in a sword fight. She's the reason I became a writer, to tell her story.

3. Coffee, tea, or milk?
All three!! I have a dire weakness for whole milk, though I try to drink 2% at least. I like coffee with tons of sugar, and any kind of stout British tea. No herbal tea for me.

5. Who are you reading right now?
My Critique partner Jen Brooks. Her new novel Wishstone is so fabulously painful, wait until you read it! It's full of bitter regrets, tentative hopes and very grey moral choices. Awesome stuff, as usual.

12. Do you outline your stories or do they just take you along for the ride?
I'm one of the few outliners. I think it's a misconception that outlining does not let the story take me for a ride. Stories go through lots of phases with me. I do a ton of just thinking about the plot, working it over in my head. Next is the scribbling random notes down at all odd hours of the day, a great line here, a name of a character yet to be formed there, a rule for magic somewhere else. That's all typically while I'm still writing another project. Then when I sit down to outline, I try to put everything down that I've already come up with in one file, so I know where the story's going. Then (and this is the truly anal part) I like to outline scene by scene.

It's one thing to know what's going to happen in a scene: Tae defeat's Jok in a swordfight. It's another to know exactly how that happens, who stands where, who talks what trash, what the weather is doing. I find the act of putting prose on paper grueling enough, I like to have all the other details worked out so that I can watch the whole scene in my mind before I try to actually write it. Of course, that's the ideal situation.

I have thrown out whole outlines and plots as early as the first 10 pages, and after all my planning and writing, I rewrote the last half of my thesis novel, so, I think for me, that outlining is just as much winging it as not outlining. I just waste less time rewriting something that was never going to have worked in the first place. I think people mistakenly believe that once a writer outlines, they stick to it religiously. That couldn't be farther from the truth. As always, the story dictates my direction, and I go where it goes. I just like to be prepared. :) (Can you tell this is a soapbox issue of mine?)

Rhonda Mason lives in New England, where she writes whenever she can conquer her own self-doubts. She has a BS in Environmental Science and an MA in Writing Popular Fiction from Seton Hill University. Her urban fantasy short story "Love's Consequence" appeared in the Modern Magic anthology, and her historical romance novel, Dishonorable Intentions, is being released by Cerridwen Press next year.

She divides her time between writing romance and writing fantasy that has strong romantic themes and plenty of fighting. Ideally she'd love to be working on Sworn Sword's sequel, but her current project is a futuristic romance titled Empress Game.
heidi ruby miller heidi's pick six rhonda mason