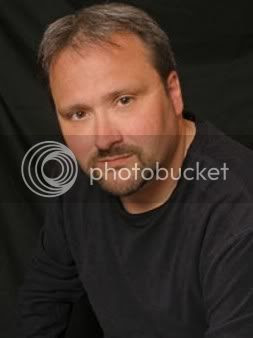 1. Which of your characters is your favorite?
Well, Kirin from the Blood Magic series was the hardest to write, seeing as how she’s a troubled woman, a childless wife in an unhappy, abusive marriage, as well as a necromancer, further complicated by the fact that she speaks to the reader in first person. Given the kind words so many female readers have given me about how well they thought I captured her voice, though, she will always have a place in my heart. If we’re talking about pure favorites, though, it has to be Perry, the protagonist from my forthcoming urban fantasy series. Perry is in many ways a guy just like me – an artist living in Chicago, struggling just to make a living (write what you know, right?). In his case, however, he gets thrust into the middle of a faerie war when he’s fingered as the “prophesied hero” that’s central to the struggle. Through the book, he’s just so lost, struggling to understand the things that are happening to him and the way his world is being overturned, and writing him was deeply gratifying. Hopefully he’ll prove as fascinating to a publisher as he is to me – wish me luck!

4. What else can you do besides write?
I’m trained as a visual artist and have a BFA from the School of the Art Institute of Chicago, so I love taking photographs, illustrating and doing ceramics. I also can play drums, mainly African hand drums. Lately, I’ve been putting all of my creative eggs in the writing basket, however (I had no idea how writing would grow to demand so much of my creative attention), so I’ve had to step back from that to keep from going insane. When I’m not writing, I like playing PC games and writing reviews about them over on MyGamer.com, where I’m a senior editor. I also like modifying my cars – I’m a lifelong Mini Cooper fan, and have a pair of cars that I like tinkering with on weekends.

7. What is the toughest scene you ever wrote?
The death of Kirin’s baby and her temptation to resurrect it in Blood Magic, hands down. I was struggling with the end of that book, and the idea I had was, quite frankly, not very dramatic. Then my wife and I were talking in bed one night and she suggested the scene that finally appeared in the book. It was so disturbing to me – repellent, really – that it actually gave me nightmares for a week, before I finally forced myself to just sit down and write it. Thinking about it even now makes my skin crawl, which is the reaction I was hoping to evoke in the reader.

8. Where do you find your inspirations to write?
Everywhere and anywhere. Anything I encounter: a novel or a nonfiction book; an article in a magazine; an interview on NPR; a show on the Discovery Channel; people I meet on the street… everything has the potential to inform a writer’s work. That’s why I believe that writers or other creative people should experience as much of life as they can, talk to as many people as possible and always try to go outside the boundaries of their everyday lives in order to experience new things. As far as what inspires me to sit down every day and put words on paper, it’s no big secret: it simply was a case of where the pain of NOT writing at one magical point exceeded the pain of getting up an hour early every morning to write. Once you hit that point, writing daily is the easier path.

10. Are you into sports or other physical activities?
When I was in high school I was the archetypical gamer/couch potato and by the time I was 27 I weighed 250 lbs. Luckily, I was diagnosed with diabetes in my late 20’s and it really got me up off my lazy ass and got me moving. I chose to look on the disease that killed my grandfathers as a rallying cry to be more physically fit, and now I go to a gym several times a week. I also have done kendo, a Japanese martial art using bamboo swords, for several years, and while I’m not active in it at the moment (my group fell apart), I’m looking to start it up again as soon as possible. I miss bludgeoning people in the head with a stick – it’s a wonderful stress reliever.

12. Do you outline your stories or do they just take you along for the ride?
I generally write a loose outline and then let the characters do all the hard work as I write. I believe that if the writer really nails the character’s motives and drives that the plot will follow inevitably from the moment that character is dropped into a dramatic situation. The trick is coming up with the compelling character as well as the dramatic situation, and allowing them to interact with a minimum of preconceived notions. That said, the risk is that often my characters will go off and do weird things that I didn’t predict, which is very cool, but it can also be frustrating when they go down dead-end plot roads. In the end though, that frustration is almost always outweighed by the thrill of discovery, as unexpected story path open up.

Matthew Cook is a writer and artist living in Columbus, Ohio. After years of struggling to break into the world of visual arts, Matt took a “real job” in the online banking industry, which is still how he pays the bills.

In 2002, Matt started work on yet another draft of an urban fantasy novel that had been rattling around in his head since college: a story about a “regular Joe” that gets swept up in a faerie war. This time, the writing habit stuck, and three years (and 200,000 words later) he had the first draft of his book.

Daunted by the prospect of editing such a large work (publisher and author friends kindly informed him that very few – if any – publishers would take a risk on such a large manuscript from a first-time author), Matt decided to take a break from the urban fantasy, and began dabbling in a character study of a young woman that turns to necromancy to create “sweetlings”: undead children that fill the void in her heart where living children should be. That sketch soon took on a life of its own, resulting in the dark fantasy novel Blood Magic (available from Juno Books.

Matt has written a sequel to Blood Magic, titled Nights of Sin, which will be available in August 2008, also from Juno. He is also working on the final edit to the urban fantasy, and hopes to publish it in 2009. He resides in a modest, cookie-cutter house in a cookie-cutter suburban sub-division with his wife, 2 children and multiple furry/feathered/finned pets, but lives 24/7 in the weird spaces in his head. Sometimes he comes out just long enough to do interviews or pen the occasional email, forum post or blog entry. You can learn more about him at: http://bloodmagicbooks.blogspot.com/
heidi ruby miller heidi's pick six matthew cook