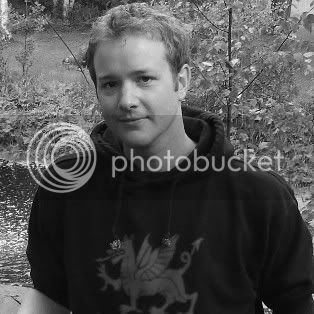 1. Which of your characters is your favorite?
Without a doubt, hands down, this has got to be Clayton, the teenage boy in my short story “Something Fishy This Way Comes”, which was published in Permuted Press’ The Undead: Skin and Bones. Clayton is a big mish-mash of my high school friends (and maybe some of me thrown in for good measure). Many of the idiotic things that Clayton does in the course of the story are based on real events. Not the zombie gold fish, mind you, but you get the picture. (And yes, mish-mash is the technical term.)

4. What else can you do besides write?
I can edit! Graveside Tales just published my first book as an editor, Fried! Fast Food, Slow Deaths, an anthology of deep-fried horror stories. It comes endorsed by some big-name horror authors, such as Jeff Strand, Kim Paffenroth and Fran Friel, and I’ve just found out that it’s been recommended for a Bram Stoker Award, a huge honour. My co-editor, Colleen Morris (who also happens to be my wife), and I are now planning our next anthology. Details will be announced soon.

5. Who are you reading right now?
I just finished book four in Naomi Novik’s Temeraire series, Empire of Ivory. The first three books were solid historical fantasy tales, but I felt the fourth was a bit of a letdown. I’ll still be first in line when the fifth book is released. I’m now about halfway through Cutting Block Press’ Horror Library Vol 2, which is scaring the crap out of me. Standout stories so far have been Ian Rogers’ “Charlotte’s Frequency” and Matt Hults’ “The Show Must Live On”.

7. What is the toughest scene you ever wrote?
The final scene in my first novel, Frozen Blood. It’s a...devastating scene, emotionally and physically, and writing it literally drained me. I can’t say anything else because the book hasn’t been published yet. Lachesis Publishing will release it in 2008.

12. Do you outline your stories or do they just take you along for the ride?
It depends on the book or story. For instance, I painstakingly outlined my children’s storybook, The Teddy Bears of Tomorrow. It’s a short book and I wanted it to move quickly to maintain a child’s interest, so every word had to count. But most times I just jump in the river and see where the current takes me. It’s more fun that way. And I’m a big Lazy River fan at water parks.

Joel A. Sutherland is a librarian, an author and an editor. His short fiction has appeared in many anthologies and magazines. He is currently completing his Masters of Library and Information Science from the University of Wales, Aberystwyth. He lives in Whitby, Ontario, with his wife and their Goldendoodle. Visit Sutherland online at www.joelasutherland.com.
Posted by Heidi Ruby Miller at 8:10 AM