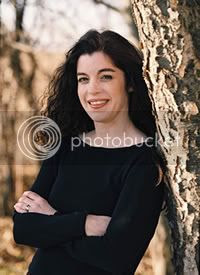 1. Which of your characters is your favorite?
Definitely Ciara Griffin, the heroine of my upcoming vampire novel, Wicked Game. She’s your typical con artist in many ways—clever, confident, and morally flexible—but she’s not completely nihilistic. Ciara’s on an unusual redemption quest: saving a vampire radio station from corporate takeover, a mission that becomes a matter of life and un-death.

It’s terrific fun to be in Ciara’s head, because I get to say and do things I could never get away with in my own life. My other favorite character, Lucifer from Requiem for the Devil, appeals to me for the same reason.

I suppose I gravitate most strongly to my “bad” protagonists. Maybe I enjoy the challenge of making them sympathetic, or maybe I just relate to them better (let’s not look too hard at that second possibility, shall we?).

2. Tell me about your travels.
In college I backpacked across Europe, where I lived on $26/day by staying in youth hostels, stood up all night on Italian trains in the compartment between the cars (outside the loo), and wandered all over the Greek island of Rhodes tracking down a man named Stavros, which is the equivalent of combing Staten Island for a guy named Steve (but with better scenery). That which did not kill me, made for great stories.

These days, I always seem to end up in wonderful places no one I know has ever heard of, like Stehekin, Washington, or Cape San Blas, Florida, or Tobermory, Ontario.

5. Who are you reading right now?
Right now I’m reading a fascinating novel called The Song Reader, by Lisa Tucker. It’s about a woman who tells people’s fortunes based on the songs stuck in their heads. I love books with musical frameworks. High Fidelity by Nick Hornsby and Stupid and Contagious by Caprice Crane are two others I could read again and again.

7. What is the toughest scene you ever wrote?
Just last week, for the first time, I wrote a scene in which a point-of-view character dies (*for good*, which isn’t always a given in my Aspect of Crow fantasy series). I not only cried buckets, but I scared myself; it was a ruthless, cold-blooded murder the character couldn’t escape.

9. Food you could eat everyday.
Fresh pineapple. Not just every day, but every second. Maybe it’s genetic—maybe my Irish brain lacks the satiation switch for tropical fruit. You know how if a horse gets into a bag of oats, it can literally eat itself to death? That’s me and pineapple.

I’ve also been known to eat an entire box of Kraft Original Macaroni ‘n’ Cheese, right out of the mixing bowl, standing next to the sink.

But I couldn’t do that every day.

11. What kind of music speaks to you?
Music is the source of much of my inspiration, which is funny considering I have absolutely no talent (well, I played a pretty mean flute in middle school). Music can illuminate the hidden corners of the human soul in a way that words can’t do alone. This quality makes
it one of the most powerful gifts a novelist can use in that never-ending quest for psychological truth.

As to what kind of music speaks to me most, these days it’s usually some form of rock or world music. I’m a huge fan of (*takes a deep breath*) delta blues, rockabilly, psychedelic, punk, goth, reggae, Celtic, Native American, and industrial, as well as the more ironic, self-aware forms of metal.

Not coincidentally, many of these styles are represented by the DJs in Wicked Game, who are each stuck in the eras in which they were turned. It’s one reason why I’m so excited about this series—I get to listen to music, buy music, learn about music, talk about music, all as part
of my job! I’m the luckiest person in the world.

Jeri Smith-Ready has been writing fiction since the night she had her first double espresso. She holds a master’s degree in environmental policy and lives in Maryland with her husband, two cats, and a retired racing greyhound.

Her hobbies include cooking and animals—though not at the same time, unless you count the cat's culinary supervision, which looks remarkably like sitting on the floor waiting for food to drop.

Jeri fosters shelter dogs with Tails of Hope Sanctuary. As of this writing, she has hosted fifteen dogs at her home, all of whom have found loving adopters.
heidi ruby miller heidi's pick six jeri smith-ready