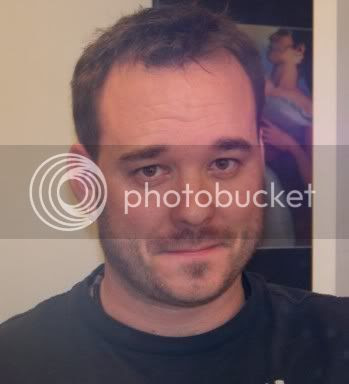 2. Tell me about your travels.
What, like to work and back?

4. What else can you do besides write?
Oh, you mean in my free time? Wait, free time… what is that again?

These days when I’m not writing, I’m either at the day job (print shop) or the night job (college English teacher) or the other night job (digital layout & editing) or just simply being Daddy to my five-year-old. I’ve a whole list of things I’d like to be doing, but so far all I’ve managed to cross off is travel a bit more and get to a con or two.

5. Who are you reading right now?
Wraith, Phaedra Weldon
The Mist, Stephen King
I am Legend, Richard Matheson
You’re Not Fooling Anyone When you Take your Laptop to the Coffee Shop: Scalzi on Writing, John Scalzi
Vorpal Blade, John Ringo
Some Golden Harbor, David Drake
…and lots, lots more…

8. Where do you find your inspirations to write?
The short answer is in circumstance.

I think every writer has read something and had the notion “Golly, that’s tripe. I can do so much better than that.” I used to have an entire shelf of tripe, so when I thought my own writing was getting lackluster I could pull those shiny-covered professionally published packets of drivel and sigh in contentment. I don’t have that shelf any more, but I remember enough of the sentiment to get by.

These days my inspirations are a lot more commercial: I have bills to pay. What I write, however, is still a matter of inspiration. I’m finding I’m more interested in what pushes people, what drives them. I like characters. My stories are very much people stories, more than gadget or adventure stories, and I figure if I can make someone sit back, after they’ve finished reading, and think “Damn, I’m glad I’m not him or her,” then I’m doing something right.

9. Food you could eat everyday.
Pineapple.

11. What kind of music speaks to you?
The loud kind, most frequently.

12. Do you outline your stories or do they just take you along for the ride?
I work differently for novels and short stories (as I’m sure most of us do). I have to outline novels, but I do little more than a synopsis for them—I’m not one of the 50-page outline novelists, by any means.

For shorter work I’m ashamed to say I have to write to the hump of the story and pray that I get thrown down the other side. I discard a LOT of story openings, oftentimes as much as 3,000 words of opening (and yes, I can hear you short-short writers groaning) before I find one that gets me to where I go. I’m very much an ‘along for the ride’ short story writer—it may take me two weeks to write the first 2,000 words of a story, but once I get to the hump and I understand where the characters are going I tend to sprint to the end… so if it takes me two weeks to write a 9,000 word story, I might only write a total of 2,000 words in the first ten days, and then the last 7,000 in 3-4 days (or less). When I’m in the end run it’s not uncommon for me to write 3,000-5,000 words a day.

13. Celebrity crush.
Nicole Kidman. And lots of others, of course, but some rise above all others.

Since a lot of what I write is military science fiction, probably the largest stylistic influence has always been David Drake, for the sheer simplicity of his worldview of the soldier. I read most of what John Ringo writes these days (although not his fantasies), and also the household names: Heinlein, Dickson, Card, Godwin, Klass… In fantasy I still swear by Glen Cook, although I’ll give George Martin his due, as well as the simpler fare of Mike Stackpole.

In a more general sense, one can’t read too much Scalzi… although I’ve been branching out lately. There is a great deal to be learned from more generic (in a genre sense) writers like King, Christopher Moore, and a great number of others I can’t seem to recall at the moment.

15. Do you still watch cartoons?
I have a five-year-old. What kind of a question is that?

I will admit I’ve been falling lately into the traps laid by friends and watching more anime. Most of it is drivel, in my opinion, but I can appreciate the artistry and every once in a while the sheer satisfaction that one gets from ignoring physics in violence. And now I’ve got the little one hooked on Justice League Unlimited (which I think we’ll all admit is a gateway ‘toon), so we’re progressing away from Dora and The Backyardigans.

Jason Schmetzer lives in Bloomington, Indiana, with his daughter Nora and thankfully no pets. He holds a BS in English (and yes, the letters are accurate) and an MA in Writing Fiction from Seton Hill University, and by day is a mild-mannered print shop employee. By night he is the dreaded English Comp teacher, inflicting the horrors of Tom Godwin and Johnathan Swift on freshmen and sophomores, filling in his free time with supplemental jobs and by scribbling down words while cackling madly.

To date Jason has written and sold short fiction to a variety of markets, with the bulk of it being work for-hire for companies such as Wizkids, Inc, InMediaRes Productions, and FanPro USA. His stories have appeared online under the Classic BattleTech and MechWarrior game lines, and he is a regular contributor to print products in those lines. His original fiction has appeared online and in print, most notably in the forthcoming Crime Spells anthology.