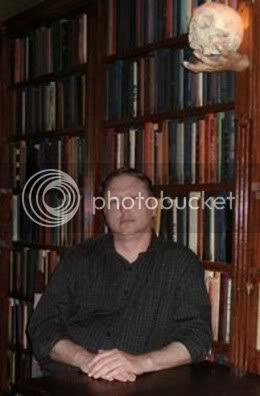 3. Coffee, tea, or milk?
Coffee, black. Period. No half-caff, low-fat, steamed mochafrappachaiaccinos. No mountain of whip cream with thick chocolate syrup drizzled on top. No goddamned plastic lid with a hole in it for sticking in an overlong straw like the proboscis of some gigantic plastic insect. Just. Coffee. Dammit.

6. Pop culture or academia?
Why choose? I’m completely egocentric when it comes to things like this. Low culture, high culture, all I care about is if it’s interesting to me. Does it stimulate my imagination and feed my creativity? I recently saw an interview on TV with Walter Mosely and he said that when people ask what his influences are, he answers “Langston Hughes and the Fantastic Four.” Fuckin’ A.

7. What is the toughest scene you ever wrote?
I was writing a story called “Keeping It Together,” which first appeared in the anthology Between the Darkness and the Fire and was reprinted in my collection All Too Surreal. The story was about a closeted gay man who refuses to accept his sexual identity. I had a friend who’d lived a gay lifestyle for years until one day he decided he wanted a “normal” life (whatever the hell that is) and married a woman and started a family. Before that, my friend had told me about an extremely painful experience he’d had in college, when a straight male roommate got curious one night and wanted to see what it was like to play for the other side. Afterward, the roommate ran to the bathroom and threw up. When I was working on “Keeping It Together,” I realized I could use this experience to help establish why my character was so determined to live in denial. I felt like a greedy vulture feasting on my friend’s memory, but it contained an emotional reality and rawness that the story demanded. I rationalized that my friend rarely read fiction and would never see the story, and if anyone else we knew ever read it, they wouldn’t connect the experience to my friend. So I sat down to write the scene. In the middle of writing it, the phone rang. It was my friend, calling to tell me his mother had just died. After offering my condolences and talking for a while, I said goodbye. I hung up the phone, took a deep breath, and returned to my computer to finish the scene.

8. Where do you find your inspirations to write?
Everywhere. We live in a damn strange world. The other day a student told me about sharing an elevator with a man who kept leaning forward to lick the emergency speaker. About the same time I saw some graffiti on the back of a restroom door. Someone had written Mr. E in black marker, and someone else had later come along, written the word Mystery in silver marker, then drew an arrow between them, just to make sure no one missed the connection. Seeing weird stuff like this makes me do a WTF? And the next thing I know, a story starts brewing. (I’m thinking of combining these two tidbits and making the speaker-licker Mr. E – for elevator.)

14. Who are the biggest influences on your work?
A while back on a message board someone suggested my horror was a combination of Clive Barker and Edward Lee. While I didn’t disagree on the board, neither of those writers – good as they are – influenced me. My greatest influences are the two authors I was reading during my formative years in high school: Stephen King and Piers Anthony. I loved King’s characters, his sense of place, and the way he built suspense. In Anthony’s work, I admired his fast-paced writing style, his almost manic free-form invention, and his skewed sense of humor. Throw all that into teenaged Tim’s mental Mixmaster, and you eventually get novels such as Like Death (which falls a bit more on the King side) and Pandora Drive (which edges a touch more into Anthony territory).

15. Do you still watch cartoons?
You bet. Cartoons can be wildly creative, like Spongebob Squarepants, and often contain better characterization and action than most live-action TV shows and films. The latest incarnations of Batman, Superman, Justice League, and The Legion of Superheroes are all quite well done. Miyazaki’s animated films are brilliant, but I have to admit I’m not into anime cartoons. The ones I’ve seen strike me as empty exercises in style. A few years back, my brother convinced me that Dragonball Z was a worth giving a shot. I watched the show for a month, and as near as I can tell, it’s about two godlike beings who stand on a barren landscape and yell inarticulate battle cries while shooting devastating power rays from their hands at each other. Over and over and over . . . In the last year or so I’ve started getting bad Dragonball Z stories (sometimes knock-offs, sometimes straight fanfic) from some of the younger students in my creative writing classes. If you think the cartoon is boring, imagine that type of story with no visuals and no sound. Makes me wish a godlike being would press his palm against the side of my head, unleash the full force of his cosmic fury in one tremendous blast, and put me out of my misery.

Tim Waggoner wrote his first story at the age of five, when he created a comic book version of King Kong vs. Godzilla on a stenographer's pad. It took him a few more years until he began selling professionally, though.

Overall, he's published over 70 stories of fantasy and horror (some of which are newly available at Fictionwise) as well as hundreds of nonfiction articles.

In addition to writing fiction, Tim has worked as an editor and a newspaper reporter. He currently teaches creative writing at Sinclair Community College in Dayton, Ohio, and in the MA in Writing Popular Fiction program at Seton Hill University. He has two bright and beautiful daughters.

Tim hopes to continue writing and teaching until he keels over dead, after which he wants to be stuffed and mounted, and then placed in front of his computer terminal.