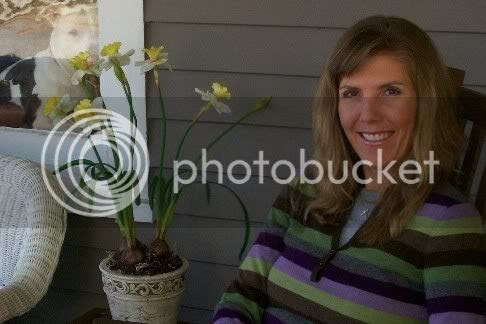 4. What else can you do besides write?
I'm a pretty mean tap dancer. And I can still twirl a baton. I recently put both of those talents to good use in a community theater production of South Pacific this past September. And speaking of community theater, I played Mickey the cop in the female version of The Odd Couple last April, and had several small roles in Little Shop of Horrors in May.

I'm also an amateur cat wrangler. I have this Persian cat that can jump through hoops and shake paws, as well as perform basic dog-obedience commands. She's a hoot at parties. Once I started teaching her, three of my four remaining cats wanted to get in on the act. So, we've got a little feline circus going on at my house.

7. What is the toughest scene you ever wrote?
The most emotionally wrenching scene was the end of a short story where a stray dog a couple had wanted to adopt but had to put down due to catastrophic injuries from a car accident, comes back from the dead and lives with them as a ghost dog. The story was inspired by a real life incident. Every time I read the ending, I choke up. That dog (the real one) really touched our hearts. We've since adopted a dog from the shelter very much like him, but before we did, the story served as a way for me to deal with what happened. I was able to lay that dog to rest, so to speak.

12. Do you outline your stories or do they just take you along for the ride?
I can not outline to save my life. Okay, that's not quite true. I used to pretty much just wing it when it came to creating a story, but after attending the Odyssey Fantasy Writing Workshop, I now partially outline and then discover the rest of the story as I go along. I've recently begun using David Morrell's plot-talking technique and find this quite helpful in the initial stages.

14. Who are the biggest influences on your work?
My two writing teachers, Laura Anschicks, former instructor of the College of DuPage Writers' Group in the Chicago area, and Jeanne Cavelos, the director of the Odyssey Fantasy Writing Workshop. I'm a firm believer in that old saying: When the student is ready, the teacher will appear. I found each of these women at different times in my life and they were exactly what I needed at that time. I attended the COD Writers' Group from '99 to '01, and Odyssey in '05, returning the past two years for The Never Ending Odyssey. I honestly don't think I would have made the strides I've made without their influence. I certainly don't think I would have sold any stories or poems.

Susan Abel Sullivan lives in a one hundred-year-old Victorian house in Anniston, Alabama, with her husband, five cats, a dog, a ferret, and a snake. She has a B.S. in Exercise Science with a specialization in Dance, and in her former life, worked for the YMCA as a Fitness Director. Her stories and poems have appeared in Andromeda Spaceways Inflight Magazine, Peridot Books Online, Alien Skin, Beyond Centauri, Artisan: A Journal of the Craft, and Writers' Journal. Susan is currently working on a novel.
heidi ruby miller heidi's pick six susan sullivan