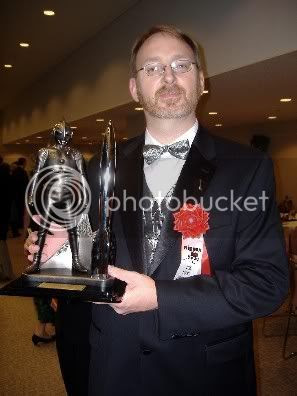 1. Which of your characters is your favorite?
Er, none of them. They're just characters! Come on. They're there to tell a story.

2. Tell me about your travels.
Japan for WorldCon was amazing. The flight was atrocious. Who put Japan so far away?

4. What else can you do besides write?
What else can I do? Just about anything. I'm an omni-competent man. ;)

What else do I do? Have fun with my four kids: Audrey, Eli, Graham, and Claire. Spend time with my wife, Stacey. And study: I'm getting an MBA at OSU. And I volunteer for SFWA. And...

5. Who are you reading right now?
Hernando de Soto, The Mystery of Capital.

6. Pop culture or academia?
I love pop culture. I love to learn. I can't pick! My browser brings up a random Wikipedia entry as my home page.

7. What is the toughest scene you ever wrote?
I'm sure it's coming up soon.

8. Where do you find your inspirations to write?
The pay check.

10. Are you into sports or other physical activities?
The older kids and I are all taking Tae Kwon Do.

12. Do you outline your stories or do they just take you along for the ride?
Yes.

14. Who are the biggest influences on your work?
Philip Jose Farmer, Harry Harrison, Joe Haldeman


Paul Melko lives in Ohio with his beautiful wife and four fairly wonderful children. He is an active member of the Science Fiction Writers of America, where he sits on the board of directors as the South-Central Regional Director and is chair of the Grievance Committee.

Paul's fiction has appeared in Asimov's Science Fiction, Realms of Fantasy, Spider Magazine, The Year's Best Science Fiction, and other magazines and anthologies. His work has been translated into Spanish, Hungarian, Czech, and Russian. A collection of his science fiction stories, Ten Sigmas and Other Unlikelihoods, is scheduled for release in 2008. Paul's work has been nominated for the Sturgeon, Nebula, and Hugo Awards. He recently attended WorldCon in Japan where he was honored to accept Tim Pratt's Hugo Award for Best Short Story. He however lost his Hugo to Robert Reed. All things considered, accepting for Tim was almost as good as winning his own.

Singularity's Ring (Tor Books, Feb 08) is Paul's first novel. The protagonist is actually five humans who can chemically share thoughts, allowing them to act as one entity. Strom's story, "Strength Alone," (part of
Singularity's Ring) made the Nebula preliminary ballot. Paul's novella "The Walls of the Universe" was nominated for the Hugo in 2007. It is the basis for his next novel.
heidi ruby miller heidi's pick six paul melko