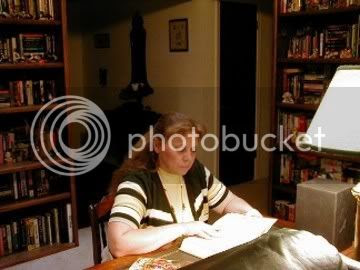 1. Which of your characters is your favorite?
Haemas Tal of Moonspeaker and House of Moons is my favorite. I learned a lot while writing her, and she grew quite a bit over the course of the two books. She appears in a third novel, Moonchild, which was supposed to come out from Hawk a few years ago, then didn't because of financial troubles. I'm currently seeking a new publisher for it.

3. Coffee, tea, or milk?
Actually, I don't like any of them. My mother told me I'd never be truly grown-up until I learned to drink coffee and I was delighted to find out that not-growing-up was that easy. I'm addicted instead to Diet Dr. Pepper. So far it hasn't seemed to help with the not-growing-older thing, though.

4. What else can you do besides write?
I taught elementary school for 27 years but now I'm free at last! These days, in addition to writing, I also work on the con committee of a local literary sf convention, Conestoga, and serve as Coordinating Judge for Writers of the Future. Every quarter numerous boxes of stories come to me with the manuscripts in plain white envelopes with no authors' names and I read them to pick eight finalists. The best aspect of that job is that every year I get to travel to the WOTF workshop and teach for four days with Tim Powers. It's always fun to meet the writers of the stories and get to know them. Then in my spare time, I take my two dogs, an Akita and a Siberian Husky, for walks and hang out with my husband.

5. Who are you reading right now?
I'm reading a Sharon Shinn book at the moment, then I have a Naomi Novik book on the to-be-read stack, along with a Robin Hobb and a Tim Powers. I recently finished C.J. Cherryh's Deliverer. Diana Gabaldon's Lord John and the Brotherhood of the Blade, and Michael Chabon's The Yiddish Policemen's Union.

12. Do you outline your stories or do they just take you along for the ride?
For years, I didn't write a novel because I kept hearing from professional writers that "you have to be able to outline if you want to write a book." Then I read Lawrence Block's Writing the Novel from Plot to Print. Block doesn't outline. He just "kills" someone on the first page and goes on from there. Cool, I thought and set to work. Six months later I completed the first draft of my first novel. Since then, I've asked a lot of professional writers this same question. It turns out that about fifty percent outline and fifty percent, like me, can't. Their access to their subconscious just doesn't work that way. Unfortunately, your life as a writer will be much easier if you can outline, because publishers want an outline from you before they'll give you a contract. So, if you can outline, you should.

14. Who are the biggest influences on your work?
Andre Norton, Ann McCaffrey, C.J. Cherryh, Octavia Butler, and Marion Zimmer Bradley. Hmmm. Those are all women. I wonder how that happened!

K. D. (Kathy) Wentworth was born in Tulsa, Oklahoma, and in a subsequent dizzying tour of the nation, managed to attend thirteen different schools by the time she graduated from high school in upstate New York. Returning to Oklahoma to attend the University of Tulsa, she earned a B.A. in Liberal Arts and has had the sense to stay put ever since, although she dodges the occasional tornado. She taught elementary school for more years than she cares to admit and retired in 2003.

She got her start winning in the Writers of the Future Contest in 1988, and then later won the Field Publications Teachers as Writers Award in 1991. She has sold over fifty short stories to such markets as Hitchcock's Mystery Magazine, Aboriginal SF, Pulphouse, Return to the Twilight Zone, Fantasy & Science Fiction, and Realms of Fantasy. She published three novels with Del Rey, The Imperium Game (February 1994), Moonspeaker, (November 1994), and House of Moons, (July 1995). Her more recent Hrrin novels Black on Black, and Stars Over Stars, were published by Baen in February 1999, with the sequel in 2000. Her most recent book was The Course of Empire with Eric Flint published by Baen in 2003. Her earlier novels have been reprinted by Hawk Publishing Group and are available at bookstores or from Amazon.com. Three of her short stories have been Nebula finalists: "Tall One," "Burning Bright," and "Born Again."

Ms. Wentworth is an active member of the Science Fiction Writers of America, (SFWA) and was elected Secretary in 2000 and in 2003. She became a Judge in the L. Ron Hubbard's Writers of the Future Contest in 2000 and now also serves as Coordinating Judge for the contest. She loves teaching in the Writers of the Future Workshop with Tim Powers each summer. She attributes her success to having two very large dogs and a wonderful husband, not necessarily in that order.
heidi ruby miller heidi's pick six k. d. wentworth