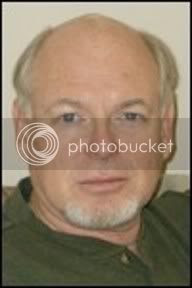 1. Which of your characters is your favorite?
Pieter VanderHaar- In a SF novel in progress (Working Title – K/T Trek) about time travelers at the Cretaceous/Tertiary Boundary, Pieter is an accomplished villain that you can’t help but understand and almost encourage. I’ve had as much fun writing about his history and past that won’t ever make it into the novel as writing about his thoughts and actions in the novel.

2. Tell me about your travels.
Five years ago, I had a chance to vagabond through central and western Ireland for three weeks, staying in B&B’s, and seeing parts of the Old Sod that I never thought I would, due mainly to getting lost trying to follow the poor signage in Ireland. I’d live there if I could ever tear myself away from Chicago.

I do a fair amount of bicycle touring. Two years ago, I cycled the KATY Trail, a rails-to-trails route across northern Missouri. I’ve cycled around Lake Michigan, in upstate New York, on Caribbean Islands, and in Ireland. I usually find a bicycle to ride wherever I go. It’s a way to quickly immerse myself in the area where I’m traveling.

4. What else can you do besides write?
With the other side of my brain, I’m a manufacturer’s rep in the transportation industry. I’ve been a serious cyclist for over thirty years and 35,000 miles, a tourist and day-tripper, not a racer. I tent camp four or five times a year. I enjoy the flower garden that I tend.
Both my children are out of the house, so my wife and I are discovering each other again. Turns out we’re still best friends.

5. Who are you reading right now?
I’ve had a case on Charlie Huston for the past two months (Caught Stealing, Six Bad Things, Already Dead, No Dominion). He’s sort of noir on speed. I always enjoy flawed characters who try to make the best of bad situations.

12. Do you outline your stories or do they just take you along for the ride?
I’m constantly surprised at what my characters end up wanting to do, despite my instructions to them. I usually have a pretty good idea of the story I want to write. Before I put pen to paper (yes, I do write my first draft longhand),I use the cluster method from Gabrielle Rico’s, Writing the Natural Way, to help me figure out what the scene, chapter, or character intent really is. The stream of consciousness that results surprise me nine out of fifteen times.

14. Who are the biggest influences on your work?
Edgar Rice Burroughs and Richard Brautigan. I was weaned on Burroughs as a lad and always enjoy the ability to take a reader to elsewhere and elsewhen. Richard Brautigan had a way with words and an appreciation of popular culture (popular for me as a child of the sixties). His short stories were poems, dense in language and colorful of character.

Jerry Ryan is an award winning freelance writer and has produced weekly columns for the Courier Sun and monthly columns for Windy City Sports in Chicago, Twin City Sports in Minneapolis/St. Paul, and Metro Sports in Boston, New York, and Washington, D.C. He has regularly contributed to the Chicago Amateur Athlete, the Liberty Suburban Chicago Newspapers, and has produced and aired weekly radio spots for WDCB-FM in Glen Ellyn, IL.

Jerry has had poetry published in The Prairie Light Review, won the Mountainland Publishing Poetry Grand Prize, and received an award for the best U.S entry in the Fifth International Poetry Contest in the Firstwriter.com Magazine. You can read another interview with him at Firstwriter.com.

He has also won the Short-Short Story award in the national humor magazine, the Funny Paper.

In May 2007, St. Martins Press published the short story, “A.K.A.”, in the anthology, Next Stop Hollywood; Short Stories Bound for the Screen.

Please visit his website and Windy City Sports and Next Stop Hollywood to view samples of his work.
Posted by Heidi Ruby Miller at 8:34 AM