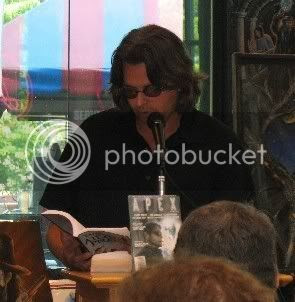 4. What else can you do besides write?
I can play piano, guitar and drums well enough to make money at it. I curse well and can draw dragons. I can program in C and build a MAME machine from scratch. I can still run a mile in six minutes. I can drink when necessary and never get a hang over. I can make dead authors interesting to high school students. I can talk in public without saying “um.” I can foresee each and every potential terrible outcome in any situation.

I’ll usually do two of three chapters a day of about seven different books. Channel surfing with literature. Eventually the pile will get so bad, it will topple over and actually grow on the floor another full week with more books added to the mix each night. Eventually, I’ll come home and discover that the Mrs. has had enough and that all the books are magically back in my office. This particular routine has about a three week cycle.

7. What is the toughest scene you ever wrote?
They’re almost all a nightmare as writing is typically pretty painful for me. I don’t do rewrites at all. So once it’s on the page, it’s on the page. But that means it sometimes takes me a week (!!!) to write that one page. Or an hour to write one paragraph. You’d think I would have learned better while writing advertising copy for ten years. Quick, get it done, etc. etc. Yeah well, I’m still convinced this fiction stuff actually matters. So, it can be slow going at times. 500 words an hour max. I’m somewhat comforted to learn that Vonnegut wrote this way.

8. Where do you find your inspirations to write?
Burning jealousy. Ideas are all over the damn place, it’s finding the drive to sit down and actually put the suckers down that’s the challenge. My very first published tale (a Writers of the Future winner), I wrote in about three days because I’d seen that some guy I knew had won the contest the year before. It pissed me off, so I started writing the same day I found out. Now, I do a lot of my writing at the local bookstore. I wander the aisles first, see all the people who are doing something great. I get envious, resentful, then pissed. Then, I start typing.

13. Celebrity crush.
I would peel grapes for Judith Regan.

14. Who are the biggest influences on your work?
Barbara O'breza and Joe Truitt, my English teachers from Jr. and Sr. year of high school. My first “big book” will be dedicated to these two certainly, but let me give some love and respect now. They taught me how to read and write. Period. My plots and ideas are completely driven by theme, a direct result of learning how to really study and appreciate the masters. I could list fifty writers who’ve influenced me, but it was because of these two teachers that it occurred to me to even be influenced in the first place.


Geoffrey Girard is an award-winning fiction author of fantasy, horror and historical tales whose works have appeared in several best-selling anthologies and magazines, including Writers of the Future (a 2003 winner), Damned Nation, Prime Codex, Aoife's Kiss, The Willows, and Apex Horror & Science Fiction Digest.

His first book, Tales of the Jersey Devil, thirteen original tales based on the legendary monster, was published in 2005. Tales of the Atlantic Pirates (2006) and Tales of the Eastern Indians (2007) followed. Apex Digest is currently serializing his suspense/horror novella, Cain XP11, in four issues.

Geoffrey graduated from Washington College with a literature degree and worked as an advertising copywriter and marketing manager, later shifting to computer programming and now to teaching high school English and Creative Writing. He has presented seminars and workshops on creative writing at colleges, elementary schools, bookstores and writers' organizations and can also be spotted speaking at various fantasy/horror conventions. Born in Germany, shaped in New Jersey and currently living in Ohio, Geoffrey is also a musician having released an album of piano songs he composed and recorded. He is currently at work on two more Tales Of... books and a new horror novel.