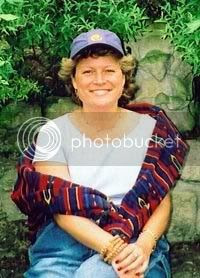 1. Which of your characters is your favorite?
I guess I'd have to say that Mama from my novella, Mama's Boy, is my favorite. She's one nasty broad and I certainly don't like what she did, but as a character, she came to me in something akin to mental Technicolor. A loud and vivid character, she was exciting to write and fascinating to discover as the story unfolded. She certainly added a lot of “flavor” to an already wicked story.

2. Tell me about your travels.
I don't like preparing for trips, and I don't really like to fly (long story for another day), but I LOVE visiting new places and meeting the people who live there. I'm an American and I was born and raised in the lovely little state of Maryland, so of course I've traveled up and down the east coast. I went to college in Philadelphia, Pennsylvania, and I lived at the US Military Academy at West Point, New York, with my daughter and first husband for about sixteen years. It's absolutely beautiful there along the Hudson River.

A few years back, I had a logistics/seminar job that took me to many different cities in the US and one of my colleagues and I had a little game where we'd try to visit the local baseball stadium in each city we'd visit. It was a hoot, and quite interesting to see how differently fans from around the country behaved. Big difference between Yankees fans and Mariners fans. Those Seattle folks were especially polite for baseball fans.

Not long after my baseball stadium hunting days, I found myself a new and improved husband. He's from Scotland and we lived in the UK for a couple of years. What a great place for traveling. It's so easy to get around by bus or train, and there's so much to see in close proximity. Many spots are my faves, but I guess topping my list is the Chalice Well Garden in Glastonbury, England, Tintagel in Cornwall, Kew Gardens in London and Findhorn in Scotland. I'm sure after this is published, I'll think of dozens of other places I should have mentioned.

Currently, we live in southern New England, and recently moved across the street from the sea. It feels like living on vacation here, and after just a few months, it's fast becoming one of my favorite places in the world. Still on my list of places I want to visit: Australia, Italy, France, Germany, Vancouver Island, Victoria CA and Bali...heck, really just about anywhere.


3. Coffee, tea, or milk?
4. What else can you do besides write?
5. Who are you reading right now?
6. Pop culture or academia?
7. What is the toughest scene you ever wrote?

8. Where do you find your inspirations to write?
Dang, they're everywhere! I've gotten story ideas from a pattern in a blanket or dust bunnies under the dryer. It's kind of a constant flow thing for me. Story prompts are also a great source of inspiration for me. I belong to AJ Brown's flash fiction group at Zoetrope.com, and we do a weekly prompt for a one hour writing challenge. It's a friendly competition and the person that wins offers the prompt for the following week. I've found that hammering out a flash story in an hour is not only a great way to silence that nagging first draft editor (with an hour there's no time to dawdle over the "right" word!), it provides some good story bones for expansion into longer fiction. Plus, it's fun as hell.

12. Do you outline your stories or do they just take you along for the ride?
I'm an outliner. When an idea strikes me, I start out by jotting a few notes, usually a scene or two - they roll out of my mind like scenes of a movie. Then I lie around a lot day dreaming at this point and just watch the scenes in my head and ask questions about what's really going on. Eventually, I'll have the feeling of something clicking into place, a knowing that I've jumped on a sort of story train and things begin to take off, falling quickly into place. That's when I start writing down everything I know about the story and all the questions I still have about it.

When I feel like I have a general idea of what's happening in the story and to whom, I begin listing the scenes – they kind of spill out of my mind while riding story train. The scenes will eventually stop spilling, and that's when I organize them chronologically. Once I have that sorted, I can begin to see the best way to structure the piece. This process feels like a puzzle to me, and finding the best way to structurally tell the story is a challenge, which I love. Of course, it's all flexible. As the actual writing progresses, sometimes the whole puzzle game changes, and that's fun, too.


13. Celebrity crush.
If I were a few years younger, I'd admit that Orlando Bloom is quite a honey, but since I'm not, we'll just pretend I never said that. However, whenever Gerard Butler is on the big screen, I become exceedingly happy. Finally, I have such admiration for Neil Gaiman, I suspect when I finally meet him, I will become giddy and mute, or my tongue will swell up choking me to death at his feet. Besides being one of my greatest writing inspirations, Mr. Gaiman's such a cutey pie, and from all accounts, he's also one of the nicest guys in the business.

15. Do you still watch cartoons?
I don't watch my old Warner Brothers faves much anymore (Pinky and Brain, remain at the top of my list), but I'm a true lover of animation. I suspect if I had an additional 24 hours in each day, I'd become an animator. I know it sounds silly, but watching great animation makes me feel giddy with joy. From greats like Hayao Miyazaki to a plethora of wonderful young animators sharing their wares at MySpace or YouTube, they all make me a very happy camper.

Fran Friel is a Bram Stoker-nominated author, residing by the Cthulhu riddled sea in rural New England with her husband and mad dog Labrador. Her latest project is a collection of short stories, including her Bram Stoker-nominated novella, Mama's Boy, due for release in Spring 2008 from Apex Publications. Fran is also the cyber-warden and a weekly columnist for The Horror Library Blog-O-Rama. You can check-up on her latest antics at her MySpace page and at her lair.
fran friel heidi ruby miller heidi's pick six