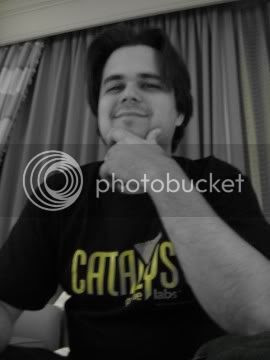 1. Which of your characters is your favorite?
Any that have a flaw of some kind that keeps them from being black or white. I love "gray" characters, because they're the most relateable to the human experience.

2. Tell me about your travels.
I've been to about half of the states in the Union and Canada; my international travels are less, though it helps to be married to a travel company's HR guru.:) We've done a wandering drive of Ireland and been to Bermuda several times. We're currently planning a 12 day jaunt through New Zealand next fall. My better half has been to many more places than I; I live through her copious amounts of photos (she's a semi-amatuer photographer).

4. What else can you do besides write?
I play a lot of tabletop wargames, and to a lesser extent I can be slaved to my Xbox. And I seem to be the rare male who actually doesn't need to ask for directions; I have a near-photographic memory when it comes to maps.

7. What is the toughest scene you ever wrote?
In Jihad Hot Spots: 3070, there was a scene where I had to convey a surprise space attack that wipes out several WarShips - the trick was, I could only do it through radio chatter. That was really, really difficult to do in order to 'paint' the scene right.

8. Where do you find your inspirations to write?
Everywhere. TV shows, books, nature, family, friends. Inspiring me isn't hard. It's the execution that's difficult sometimes.

10. Are you into sports or other physical activities?
I used to play hockey until a bad check by a rival frat house twisted my knee. Fortunately it wasn't torn, but that ended my days as a winger. I'm an avid hockey fan; I don't follow many other sports.

12. Do you outline your stories or do they just take you along for the ride?
A little of both. Because game writing is a slightly different animal than fictional storytelling, you have to have a structure of where to go, what to cover. But within that framework, I just cut loose.

Ben Rome is one of those people you don't hear much about because the books he writes aren't usually found in the fiction aisles of any bookstore (unless a shopper forgot to put them away) - he writes gaming material. That's right - rules, universe background information, and stories within the universe. His name may not be on the front, or mixed in with a compilation, but it's still there. In 2006, he wrote and had published over 100,000 words in game material; he's on track for 2007 to see nearly 130,000 words. His work as a primary author can be found in the Classic BattleTech (CBT) line in Dawn of the Jihad, Jihad Hot Spots: 3070, Jihad Hot Spots: 3072, TRO: Vehicle Annex, TRO: 3050 Upgrades, Mercenaries Supplemental: Updates, and Starterbook: Sword and Dragon. He's also contributed to several other CBT publications as well in varying capacity.

Most of his writing has been for FanPro LLC and Catalyst Game Labs, in the Classic BattleTech license (owned by WizKids, LLC). He's also done contracted work for the International Spy Museum and several radio scripts for stations in the Pittsburgh, PA radio market (his former residence). In addition to writing for games, he also does extensive playtesting; he's been involved with various incarnations of Classic Battletech, MechWarrior: Dark Age, MechWarrior: Age of Destruction, Crimson Skies, and other games he can't talk about. He's been doing this since 1998.

In Ben's "real life", he works as a website content and writer for a consulting firm in Vienna, Virginia. His wife and he have two cats and currently reside in Alexandria, VA. And for anyone who cares, he has a BA (English) from Northern Illinois University. His primary blogsite is Word of Ghost Bear. He usually mirrors his posts from there to his Live Journal - ghostbearmw. Ben is also a member of the International Association of Media Tie-in Writers.
Posted by Heidi Ruby Miller at 8:17 AM