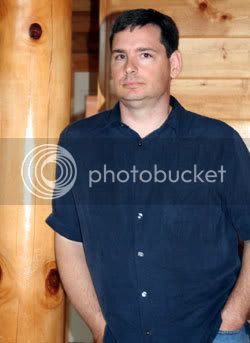 3. Coffee, tea, or milk?
The level of my coffee addiction is a bit frightening. I hope I never have to quit, because I do most of my writing in coffee shops, and I'm no longer sure I can finish a paragraph without a cup of joe.

6. Pop culture or academia?
In undergrad I was an English/theatre double major and worked my way through a lot of the canon, but it didn't take. My super power, shared by many guys my age, is to instantly relate any real-life situation to a Simpson's episode, Saturday Night Live sketch, or comic book issue.

9. Food you could eat everyday.
A peanut butter and jelly sandwich. It's ridiculous how many of those I've eaten.

11. What kind of music speaks to you?
I'm all over the map musically, but I particularly respond to those musicians whose lyrics are cryptic, clever, and densely packed -- Elvis Costello, David Bowie, Talking Heads, Radiohead, etc. Sometimes a song will jumpstart a story idea, or set the mood. One of my stories in F&SF was named after an REM song, and another F&SF story was written while listening repeatedly to Johnny Cash's rendition of "Your Own Personal Jesus."

For novels, I usually have a soundtrack in my head as I write, and sometimes the music becomes explicitly part of the story. The protagonist of my first novel, Pandemonium, falls in love with mash-ups, not only because I love them, but because the novel itself a kind of literary mash-up of my favorite genres, from Lovecraft to superhero comics. Oh, and there's also a lot of Sinead O'Connor in there. The book I'm working on now takes Bowie's "Hunky Dory" album for theme, and a couple of Steve Earle's albums for mood and setting.

12. Do you outline your stories or do they just take you along for the ride?
When I first started writing stories, I wanted to write them in the same way that I read them -- one page at a time, with a surprise waiting around each corner. What I discovered was that most of the time the surprise was a brick wall.

I learned that I couldn't begin a story until I could see its ending, and I had to use whatever craft I possessed to make the ending come off. I had to put that rabbit in the box ahead of time, tuck the cards into my sleeves, and generally rig the game. I still get surprised during the drafting process, but it usually isn't about the bones of the plot -- most of the surprises come at the sentence level.

13. Celebrity crush.
Let me just say that my wife and I have an understanding about Wynona Ryder.

Daryl Gregory's short stories have appeared in The Magazine of Fantasy & Science Fiction, Asimov's, several year's-best anthologies, and other fine venues. In 2005 he received the Asimov's Readers' Award for the novelette "Second Person, Present Tense." He attended Clarion East in the dark ages. These days he lives with his wife and two children in State College, Pennsylvania, where he writes both fiction and web code. His first novel, Pandemonium, will be appearing from Del Rey Books in the fall of 2008. Daryl is on the web at the cleverly named darylgregory.com
Posted by Heidi Ruby Miller at 8:37 AM