1. Which of your characters is your favorite?
It's Chet Gecko, hands down. His smart-aleck, film-noirish voice comes naturally to me, and I love his outlook on life. (Even if I do have a much higher opinion of "dames" than he does.) His latest adventure is in Hiss Me Deadly.

4. What else can you do besides write?
I'm a pretty decent jazz singer, a half-assed guitarist, a cartoonist, an actor, and a terror on the dance floor.

6. Pop culture or academia?
Pop culture every time. I find much to love there (in amongst the crass and lowbrow stuff). Academia is too cerebral, not visceral enough for me -- puts me to sleep every time. Where's the juice? It's in pop culture.

9. Food you could eat everyday.
Sushi. Chocolate chip cookies. Thai curry. Salad. Fish tacos. (But not all at the same meal.)

12. Do you outline your stories or do they just take you along for the ride?
When writing a mystery, I find I must outline it first. I tried Stephen King's method of "putting two characters in a room and letting them talk," but the plot got away from me. I need a basic outline, but I always leave a chunk of it unfinished, usually in the last third of the story. That way, I get to discover something as I write.

13. Celebrity crush.
Rachel Weisz. She's my girlfriend and doesn't know it. What can I say? She's gorgeous, smart, funny, and has the sexiest voice. (My former girlfriends include Minnie Driver and Emma Thompson.)

Raised by wolves just outside Los Angeles, Bruce Hale began his career as a writer while living in Tokyo, and continued it when he moved to Hawaii in 1983. Before entering the world of children's books, he worked as a magazine editor, surveyor, corporate lackey, gardener, actor, and deejay.

Bruce has written and illustrated nearly 20 books for kids. His Chet Gecko Mysteries series includes: The Chameleon Wore Chartreuse, The Big Nap, Farewell, My Lunchbag, The Malted Falcon and others.

You could say Bruce has a thing for lizards. He also has created five Hawaii children's books, including Legend of the Laughing Gecko, Moki and the Magic Surfboard, and Moki the Gecko's Best Christmas Ever -- all starring Moki the Gecko. (By the way, Moki the Gecko and Chet are second cousins.)

When not writing and illustrating, Bruce loves to perform. He has appeared on stage, on television, and in an independent movie called The Ride, where he plays a surfer's agent. Bruce is a popular speaker and storyteller for audiences of all ages. In 1998, he won a Fulbright Grant to teach storytelling and study folklore in Thailand. (No, he doesn't speak much Thai, but he loves Thai food.)

He has taught writing workshops at colleges and universities, and spoken at national conferences of writing, publishing, and literacy organizations. On top of that, Bruce has visited elementary schools across the country, from Hawaii, to Kansas, to Pennsylvania. (You’d never guess he loves to travel.) In January 2007 he was the guest author at Seton Hill University's Writing Popular Fiction Graduate Program. 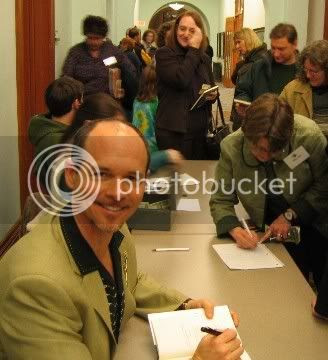 You can sign up for his newsletter at Bruce Talks.

These days, Bruce lives in Santa Barbara with his wife, Janette. When he's not at the computer or drawing board, you'll find him hiking the hills, bicycling, or riding the waves (when it's warm enough, that is). He also likes going to movies and playing jazz music.

One of these days, when it's all right with the lizards, Bruce is going to get a dog.
bruce hale heidi ruby miller heidi's pick six