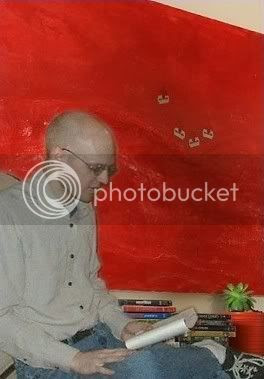 2. Tell me about your travels.
Once, I flew into Edinburgh the day of this huge soccer match. Some people I'd met there were going out bar-hopping, and I decided to tag along. It was insane. Every bar was full and every street was crammed with people waving red-and-white scarves.

After one too many beers, I fell down some concrete stairs. My new friends were kind enough to put me in an ambulance before moving on to the next pub. So, within twenty-four hours of my plane touching down, I was in an E.R. with a mild concussion and five universal healthcare stitches in the back of my head.

7. What is the toughest scene you ever wrote?
The toughest types of scenes are humorous ones. I'm not a funny guy, and nothing jams me up more than needing a character to toss off a quip or make some sly observation.

Luckily, I do have some very funny friends. If I hang out with them for a while and keep my ears open, they'll almost always say something hilarious which I then steal. Every joke in both my novels was pilfered this way. I'm amazed my friends still talk to me.

9. Food you could eat everyday.
I delivered pizza while working on Tripping to Somewhere. It's a job I'd recommend to any aspiring artist. Minimum wage plus tips to drive around and listen to the radio, with plenty of off-time to pursue less-profitable interests.

Anyway, I used to spend nine- or 10-hour shifts surrounded by pizza. I ate very well taking home orders that customers didn't pick up. But on my days off, I'd still crave it. Particularly pepperoni and black olive on a thin crust.

12. Do you outline your stories or do they just take you along for the ride?
When I started writing, I didn't outline because nobody told me I should. Diving right into a story can work, but it's a labor intensive process. A novel is like a house of cards, with every scene balanced and supported by every other scene. If I get near the end of a draft, and decide a scene should have a different outcome than I'd thought, then I have to go back and change every other scene leading up to it.

While I'm doing that, I inevitably see another scene that could be made better, so I end up re-rewriting the whole thing again.

15. Do you still watch cartoons?
Hayao Miyazaki is a genius. I've learned as much, or more, about telling fantasy stories from him than from any novelist. He isn't brilliant because he populates his worlds with beautifully strange creatures like the Catbus. He's brilliant because he makes things from our world, like rain dripping off pine needles, look so beautifully strange that catbuses seem perfectly normal and expected.