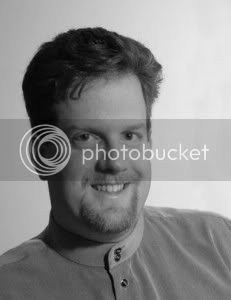 1. Which of your characters is your favorite?
That’s kind of like asking which of your children is your favorite. (I of course love both my kids equally.) With the characters it is a bit easier. John Murphy, the bartender at Bulfinche’s Pub is somewhat close to my heart as he’s brought me the most success. I'm also rather partial to Terrorbelle (featured in Sails & Sorcery) and Agent Karver of the DMA, both of whom will be having their own collections in the not terribly distant future. (Not too shameless a plug I hope.)

2. Tell me about your travels.
I've managed to live all over the county thanks to a job I once held. I've made my home in New York City, Boston, Philadelphia, Tucson, near LA, San Francisco and New Orleans, not to mention on the beach in South Carolina among other places. It was a great time, made even better by the fact that my employer was paying my rent including some time in Europe. Gives me a lot of settings I'm familiar with to set stories in.

5. Who are you reading right now?
The Tooth Fairy by Graham Joyce (much better than the title sounds) and The New Destroyer: Guardian Angel by Warren Murphy & James Mullaney.

12. Do you outline your stories or do they just take you along for the ride?
Both. I like to have an idea where a novel is going when I start although sometimes they can take off on their own and go in an entirely different direction. With stories I do both, but more times than not I know where they will end up. It’s how they get there that keeps it interesting.

15. Do you still watch cartoons?
Absolutely. I'm rather partial to the superhero genre, but there are plenty of good cartoons still being put out. And with two young kids I get an excuse to watch plenty of them.

Patrick Thomas is the author of over 75 published short stories and fifteen books including seven in the popular fantasy humor series Murphy's Lore. The latest is Nightcaps. The others are Tales from Bulfinche's Pub, Fools' Day, Through the Drinking Glass, Shadow of the Wolf, Redemption Road, and Bartender of the Gods. His stories have sold to various venues including the upcoming Until Somebody Loses an Eye, Cthulhu Sex, Hardboiled Cthulhu, Dark Furies, Clash of Steel 3: Demon, Breach the Hull, Bad-Ass Fairies, The 2nd Coming, Unicorn 8, Jigsaw Nation, Crypto-Critters VOL. 1 & 2, The Dead Walk Again, Lai Wai: Tales of the Dreamwalker, Time Capsule and Warfear.

Patrick has been an editor for Fantastic Stories and Pirate Writings, co-edited Hear Them Roar and the upcoming New Blood. His novellas appear in Go Not Gently from Padwolf, Flesh and Iron from the Two Backed Books imprint of Raw Dog Screaming Press, and the Fantasist Enterprises' anthology Sails and Sorcery: Tales of Nautical Fantasy.