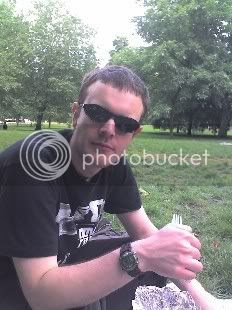 1. Which of your characters is your favorite?
Hope this doesn't sound too pretentious but I'd like to make this a "watch this space." I have every hope that the characters I'll create in the future will go far beyond any I have so far.

For the moment, the trio of leads in my unpublished ghost novel, Will Bowyer, Cassie Pontifex and Jason Pynchon probably take the lead. Not one but all of them; they cannot be separated.

2. Tell me about your travels.
As it happens, I'm abroad at present, at my sister's in Bournemouth, Dorset. I've come over to England for a few months' change of scene, and then it's back to Ottawa for a month spend preparing for what should prove the most intense exam I've ever written. But first it's off to London for a week of fun.

5. Who are you reading right now?
I'm reading Infinite Thought by Alain Badiou. At any time these days you're more likely to find me reading hard theory than any fiction. Which brings me to . . .

6. Pop culture or academia?
As a writer/academic, they can't truly be separated for me. Writers take inspiration from the things around them, and academia is around me. There are plenty of stories I've written that go back to things I've read for my studies. Certainly, "Female Rambling Sailor," contribution to Sails & Sorcery, must owe something to Judith Butler, though I won't vex my brain wondering if she'd approve of it.

Further, I'm not sure it's ever possible, at least ever advisable, to separate the two. The days of the rigid high/low division are long past, and those who disdain academia ought to look at the range of stuff being written about and analyzed on university campuses these days.

But then, I'm not without bias here.

11. What kind of music speaks to you?
"Female Rambling Sailor" borrows its name from an old nautical ballad. This is a rare time that the title preceded the story. It was too brilliant not to use -- telegraph-succinct with instant punch. I first encountered the song on a Bob Dylan bootleg, so I'll take the occasion to give props to the master.

I'm listening to "Nettie Moore" as I write this, a song off his most recent album. It sounds at once timeless and fresh, like an ancient standard just written today. It leaves me awestruck. I've seen Bob five times in concert, including once in a standing-room-only venue in Glasgow that skirted very close to a spiritual experience. I wish I could produce a body of work in my lifetime which comes close to that which he threw away in the form of his outtakes.

13. Celebrity crush.
Lately, Meg White, drummer sphinx. If you don't believe me, ask my sister about the White Stripes concert we went to in London in June, and my reaction when she stepped to the centre of the stage to sing "In the Cold, Cold Night."

Murray J.D. Leeder can't remember a time when he wasn't reading and writing. To his amazement, by his twentieth birthday he found himself published in Realms of Shadow alongside names like Elaine Cunningham, Troy Denning, Ed Greenwood and R.A. Salvatore, and making a mark on a fantasy world he had loved since he discovered it a decade earlier. He was subsequently invited by Wizards of the Coast to write Plague of Ice for the Dungeons & Dragons novel series, and then got to write his own Forgotten Realms novel, Son of Thunder.

In addition, he has written around twenty published short stories. One, The Traumatized Generation, originally released in Red Deer Press' Open Space: New Canadian Fantastic Fiction, received honorable mention in The Year's Best Fantasy and Horror 2004. In this story, he vindictively subjects his home town of Calgary to a zombie invasion; it has been reprinted in Permuted Press' The Undead: Skin and Bones this year. He has also had four stories in Fantasist Enterprises' high quality anthologies. He particularly looks forward to the release of Blood & Devotion and his mad, Cocteau-influenced reworking of the Orpheus myth, Sparagmos Suite.

Murray is pursuing a Ph.D. at Carleton University's Institute for Comparative Literature, Arts and Culture. His first and so far only academic publication is Closet and Confessional: Television and Hybridity in Mambo Italiano, published in the Canadian Journal of Film Studies. He has done research on haunted house films, French magicians from the mid Nineteenth Century and Hollywood "gimmick films" from the 1950's. He is currently shopping his ghost novel Lights from the Third Floor, inspired by his own time working in a purportedly haunted historical village in his teens.
heidi ruby miller heidi's pick six murray j. d. leeder sails and sorcery tales of nautical fantasy