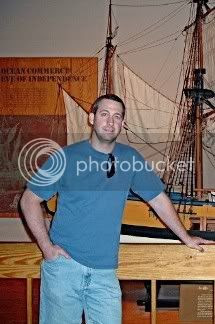 1. Which of your characters is your favorite?
Oh, that’s a tough one. I’m going to hedge my answer and say all of them, because every character is my favorite when I’m in the process of writing about them. But if I had to choose, I’d probably say Astaroth, the fallen angel from my yet-to-be-published novel, ACTS OF CONTRITION. He’s the main antagonist and villains are always so much fun to depict.

4. What else can you do besides write?
Not much! Well, I have a day job so I’m not completely useless to society. I work in a juvenile detention center, which is pretty much like a jail for children. Besides that, I try to be handy around the house. I’d like to believe my best skills involve being a good husband and friend.

5. Who are you reading right now?
I’m always reading something. Right now it’s The Word and the Void by Terry Brooks and George J.J. Martin’s A Song of Ice and Fire saga. Some of the best writing advice I ever got was to read, read, read. I love classic fantasy, anything that deals with the struggle between good and evil. Naturally, that theme tends to figure strongly in my own works.

7. What is the toughest scene you ever wrote?
The climax. It doesn’t matter for which story or novel, the climax is always the toughest for me to write because there’s so much to balance. You’ve got the action going on, whether it’s a rousing fight scene or a passionate love tryst. You also have to filter in the emotional aspects, the intellectual realizations that lead to the protagonist’s victory, and also remember to include all the little tidbits like subplots and relationship dynamics that you’ve sprinkled through the story to make sure it all sounds plausible.

8. Where do you find your inspirations to write?
I have no idea. I mean, ideas for stories can come from anywhere: a newspaper article, a TV show, a movie, a conversation, or just idle daydreaming. But where does the actual impetus to write originate? I wish I could tell you. All I know is that I can’t stop. I’ve gone as long as a few months without writing, but I always come back to it like a dog gnawing at an old bone. Somehow, it defines who I am as a person while also allowing me to see the world through the eyes of other people.

12. Do you outline your stories or do they just take you along for the ride?
I’m a plotter. I used to try to write stories without outlining, but they all fizzled and died an early death. It wasn’t until I started outlining beforehand that I made real progress as a writer. I like to plan the specific events of the story, controlling the rise and fall of the action, to arrive at a satisfying conclusion right when I want to.

Jon Sprunk lives in central Pennsylvania with his wife, Jenny, and their three enormous cats. Between his day job as a juvenile detention specialist and time spent with his family, he tries to squeeze in some time for writing. When not working on his latest novel, he enjoys traveling, collecting medieval weaponry, and pro football. Sea of Madness from Fantasist Enterprises anthology Sails and Sorcery: Tales of Nautical Fantasy is his
fifth story in publication.