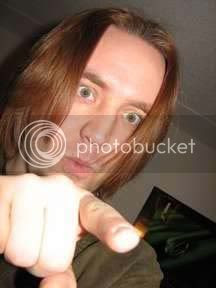 1. Which of your characters is your favorite?
(I'm assuming this means from "Rum Runners" my Sails & Sorcery story?) The totem. Which is to say, "the rum".

4. What else can you do besides write?
What else can I do well that's reasonably interesting to others? Hmm. Well, besides a lot of reading (which is probably a given for even a hack writer to say), I've been a graphic designer for over a decade, so I can manhandle a Mac and draw reasonably well. I'm a big fat game freak; strategy games, board games, dice and card games, word games, mind games, drinking games, you name it. I got pretty wrapped up in playing Texas Hold 'Em in the local pub circuit last year and made it to a regional championship game where I came in 14th out of 400 people, but I've been lax in that area in 2007. On the weekends I usually end up in some pirate excursion around PA-NJ-DE, the details of which are too many and various to recite here. I used to do all right at volleyball until I destroyed my back and shoulder. I could probably still compete in a crippled old men's league somewhere, if anybody knows of one in the Philly area...

5. Who are you reading right now?
Finishing up George R. R. Martin's A Feast for Crows in time to get the last Harry Potter before some chucklehead accidentally spoils it for me. After that, I need to devour the latest of the Dresden Files. I've been putting that off for too long already.

8. Where do you find your inspirations to write?
Mostly on the john. Seriously, though? Pretty much everywhere. I get hit with a lot of ideas when I'm soaking in a hot shower, or lying in bed at night trying to convince myself to sleep. I could see something while driving home from work, or shopping at the mall, in the crowd at a concert. There's no limit to when or where I can get struck by it.

12. Do you outline your stories or do they just take you along for the ride?
I always enter a new story with a pretty good idea of where it's going to go overall, but I usually leave several parts open to whim, to see where my brain is at that point in the story. Sometimes the story seems to drive the bus itself, going off in a direction that seems better than what I had originally planned in the outline. I think it's a tricky balance between foresight and spontaneity.

14. Who are the biggest influences on your work?
My real focus is on modern dark fantasy. One day soon I hope to be counted as a peer among names like Jim Butcher, Laurell Hamilton, Kelley Armstrong. Also vets like Neil Gaiman, Clive Barker. Actually, the more I think about it, the more names will keep coming, so I'll stop here.


Jeff Houser has been shamelessly raiding and pillaging along the outskirts of Philadelphia for most of his 33 years, and has recently teamed up with a shameless and dangerous female pirate and her small but equally ferocious child. As an 11 year veteran of the graphic design industry, Mr. Houser is currently working for a toy design firm in the suburbs of Philadelphia, molding and shaping young minds into his own graven image. He started taking his writing semi-seriously about two and a half years ago, and this story marks his publishing debut — the beginning of what he hopes to be an embarrassingly successful and lucrative writing career. Y'know...to fund more pirating adventures.
heidi ruby miller heidi's pick six jeff houser sails and sorcery tales of nautical fantasy