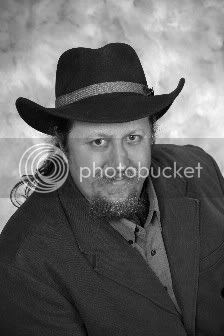 2. Tell me about your travels.
I spent two weeks in rural Guatemala and El Salvador as part of a human rights group traveling mostly among various Mayan groups. It was my first real trip outside the United States, and it was an eye-opener both to how we are perceived and how we export our culture as a country. I also learned that amoebic dysentery is a great weight-loss plan, but that's more than most people want to hear.

For a budding writer, there are few things that compare to standing in El Mozote in 1996 (look it up) and listening to a survivor tell her tale. Other than that, well, I try to get up to Canada when I have time and money – It's a wonderful place to visit, and I have a lot of fond memories there. I've seen a lot of Bavaria, courtesy of a boat-trip along the Rhine-Main-Donau from Nurnberg to Buda-Pesht. There's a lot of the world I'd still love to see.

4. What else can you do besides write?
It's not much of a secret, but I am an avid (some might even say religious) knitter. I hit the yarn shops at almost every convention, and those swag bags pretty quickly repurpose into project totes. There's something calming about the repetition and rhythm of knitting, and I often use it to focus my mind before I sit down to write.

6. Pop culture or academia?
A little of both. I prefer my entertainments to mean something, or at least feel like more than just pabulum. This is especially true in the movie theater – I'd much prefer a quiet independent film over the Hollywood's latest CGI-choked craptacular.

At the same time, I have a guilty love for really bad Z-grade movies. Not the deliberately bad stuff (though some of that has merit too) or the stuff that some execs cobbled together to wring a couple extra dollars out of folks, but the low-budget labor of love films where the crew have a sense of earnestness about their production. That Ed Wood vibe has a certain appeal to me.

8. Where do you find your inspirations to write?
I'm pretty shameless about pillaging history and myth for inspirations. I especially enjoy visiting Chinese and Japanese myth – they have themes that really get to the heart of the stories I like to tell. I guess ultimately I pull my inspirations from everywhere – Fantasy for me is more than Tolkienian/Wagnerian medievalism. I am especially fond of the 18th century, and I think that cusp of the modern age – that beginning time where The Unknown is on the defensive against the encroachment of science and reason – provides a wealth of inspiration.

12. Do you outline your stories or do they just take you along for the ride?
I outline everything, even the short stories. Sometimes the outline can be a simple 6-line thing describing the key scenes that drive the story, sometimes they evolve into big complicated things that rival the story themselves. Folks who free-write their stories impress me – I have to use a map to get where I'm going. In many cases, the ending scene is one of the first things I write.

15. Do you still watch cartoons?
Oh yeah – unabashedly. I think Venture Brothers (Adult Swim) is one of the most clever shows on television, and it riffs on a lot of the boy scientist stuff I read/watched as a kid (Johnny Quest, Tom Swift, Clutch Cargo – you know the genre.) I'm also a big Futurama fan, and still break out my Looney Toons DVDs when I need to laugh.

J.C. Hay lives a thousand miles from the nearest ocean, and so is forced to sublimate the desire to be a pirate into writing, knitting, and writing about knitting. When not cloistered behind the keyboard, or tangled up in yarn, J.C. is subservient to a pair of papillon dogs - the dark masters - and a supportive, loving spouse. A part-time film snob and a full-time food snob, much of J.C.'s free time is spent trying to introduce friends to new experiences and tastes and not enough is spent updating the Web site. In addition to other publications, J.C. Hay's novella "Collar of Iron" will be included in the upcoming anthology Blood and Devotion and his short story "Return, My Heart, to the Sea" in the Fantasist Enterprises anthology Sails and Sorcery.