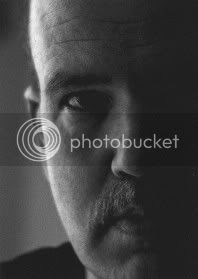 4. What else can you do besides write?
I practice tai chi (poorly), mental health counseling (professionally - licensed and certified, supervising in a psychiatric facility), basketball (running after all those misses sure is aerobic -- don't know if this is actually a "do," perhaps more of a "try"), cooking (as the son of a French chef, I have, alas, failed in carrying on any kind of tradition in that area, but I'm not afraid of fire or cooking utensils), and survive in NYC. That last one may be my greatest accomplishment.

8. Where do you find your inspirations to write?
In people, their desires, hopes, destructiveness, love and hate -- that whole shebang. I'm fond of saying people suck, but where we would be without them? As long as you don't ask the rest of the living and dead species of the world, and a majority of humanity itself (I suspect), you'd probably get an answer like "not anywhere I'd like to be!" Bully! I also get ideas from myth, which has already encoded humanity's great and small obsessions in imagery and stories. And science -- I have a hard time wrapping my head around physics and cosmology, but I find most of that type of theoretical exploration terrifying; easier to grasp is the biological world of this planet, but it's often equally frightening.

11. What kind of music speaks to you?
The blues, rhythm and blues, soul, jazz, and any version of rock and hip hop that truly plays with melody and/or rhythm and has something interesting to say, which eliminates anything commercial.

14. Who are the biggest influences on your work?
Early on, Andre Norton, Poe, myth, Heinlein, Asimov, Bradbury. Lord of the Rings was my Harry Potter. Howard, Lovecraft, Smith, Moorcock, Leiber broadened my horizons about what could be done with horror and dark fantasy. The Ballantine Adult Fantasy line changed my life, introducing me to Cabell, Peake, Hodgson, and the rest of the foundations of modern fantasy and horror. Kafka, Conrad, Shelly, Dostoevsky, the Greek tragedies, taught me about reality. Heller and Vonnegut taught me how to laugh.

Gerard Houarner fell to Earth in the fifties and is a product of the NYC school system and the City College of New York, where he studied writing under Joseph Heller and Joel Oppenheimer and crashed hallucinogenic William Burroughs seminars back in the day. He went on to earn a couple of Masters degrees in psychology from Columbia University so he could earn a living. He’s worked in Hells Kitchen, on the Lower East Side at the beginning of the AIDS epidemic, and in the Bronx at the start of the crack epidemic before settling into a quiet, contemplative and genteel career as an uncivil servant at a state psychiatric center. Married in a New Orleans Voodoo Temple, he and his wife, writer and poet Linda Addison, reside in a house decorated in Nouveau African Native French Goth Tribal Fantastic atop a hill in the Bronx.

His publishing career includes three novels and over 240 short stories (some gathered into four collections, 44 earning Honorable Mentions in 12 volumes of St. Martins Press’ Year’s Best Fantasy and Horror), as well as editing/co-editing three anthologies and serving as Fiction Editor for Space and Time magazine. People seem to talk most often about his continuing character, Max, a supernaturally endowed assassin on a quest to become human, as well as Dead Cat – a series of collaborations with the artist GAK about, you know, like, a dead cat.

His short story "The Sea in Silence" is part of the Fantasist Enterprises' anthology Sails and Sorcery: Tales of Nautical Fantasy.

Fifty-plus years into life, he has come to believe he is the kind of person who as a child wandered away from the village, spent too much time in the wilderness, and these days is allowed to return for ceremonial occasions or to scare the little children. He also believes, on cold and rainy days, that his purpose in life is to serve as an example for others, much like the crucified humans at the edge of the desert in the original “Planet of the Apes,” or the captured rebel gladiator slaves along the Via Appia in “Spartacus.” On better days, he sees himself standing at the crossroads of myth and nature, the psychological and the supernatural, the real and the surreal, the past, present and future, waiting for someone or something to come along, take his soul and leave him with the voice to tell anybody who will listen the story of how it all happened.

He continues to write whenever he can, mostly at night, about the dark.
gerard houarner heidi ruby miller heidi's pick six sails and sorcery tales of nautical fantasy