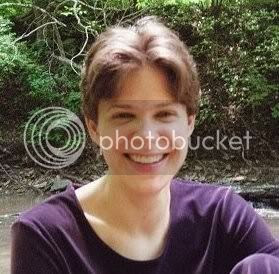 1. Which of your characters is your favorite?
The answer to this question is almost invariably, “One of the ones I’m writing now.” I’m currently working on editing a novel project, but it’s almost as hard to pick between the three principals as it would be to choose between children. I’m particularly attached to Kit because I enjoy capable adolescent characters – a young person who isn’t a “whiny teen” or a “wise child,” competent and grounded while still being, yes, a kid – and I like to think she fits the bill. At fifteen, Kit is the central protagonist in a (more or less) contemporary world, and it is her search for her mother’s killer that draws in the other two characters. She is hyper-emotional, sarcastic and less cynical than she thinks she is, but she’s also resourceful, loyal and unusually grounded. This being a supernatural story, the otherwise modern teen gets a crash-course in the mystical from water-witch Chailyn – who has the small handicap of being raised solely amongst a coven of sorcerers. Maybe most writers have done a story where a modern person tries to explain the real world to an outsider, but I had a blast with Kit’s take.

4. What else can you do besides write?
My main “schtick” outside of writing is that I perform and teach the traditional lever harp. The ornate gold-columned harp you’ve seen in orchestras is the pedal harp and is actually a newer invention. (For those of you familiar with music theory, the levers or pedals on a harp provide the ability to play sharps and flats.) My specialty is Celtic music, and I play at least one piece of music from all seven Celtic lands: Scotland, Ireland, Wales, Galicia (Spain), Brittany (France), Isle of Man and Cornwall. My obsession is with the Welsh music, but I’ve also been known to play Renaissance music, popular tunes, and just whatever catches my fancy.

I teach a number of beginning students with ages ranging from nine to too-old-to-ask and also help to coordinate a local harp circle. I play weddings, parties and stage-sets – with the latter, I also accompany myself singing. Learning further repertoire in the Welsh language (that is, songs in Welsh) is a goal of mine.

7. What is the toughest scene you ever wrote?
I have a lot of trouble with argument scenes where the dialogue has to lead to a revelation or crisis. The jealous argument in "Currents and Clockwork" is one, but I remember being completely stumped in a novel project. I knew the result I wanted and it was fitting with the characters, but I could not work out the precise exchanges of dialogue to get from point A to point F. In the end, I had to tweak a few prior conversations to provide some of the intermediary links. This is something that flummoxes me a lot. The sense of causality is there, but the specifics throw the chain off unless I sit down and rework extensively as I write. I can’t even finish a rough draft with “here there be links,” either – has to be done thoroughly or not at all.

8. Where do you find your inspirations to write?
Historical trivia – the more bizarre, the better – half-remembered dreams, randomly generated story pieces, philosophical what-ifs, writing exercises allowed to turn cartwheels, and sometimes even bits of dialogue. One of my favorite first lines came from a moment in frustration in playing a buggy computer RPG, where I could not get the confrontation with an evil priest to trigger. In frustration, I shouted at the screen, “Stop blessing me, you’re the villain,” and that, in a new context, became my main character’s first speech in a tongue-in-cheek short story. Most often, my ideas come together from a mish-mash of sources, rarely one thing but a variety of mostly unrelated concepts coming together at the same time.

10. Are you into sports or other physical activities?
Let me put it this way. I was part of a Renaissance song-and-dance troupe in my early teens, before I discovered the harp. The one thing that convinced me to keep playing the recorder (an instrument I generally disliked) was the fact that if I was not a musician, I would have to dance.

My large motor coordination has not improved since. However, I power-walk daily and keep in shape – walking in a straight line is pretty simple, all in all. I do a lot of my plotting on walks.

12. Do you outline your stories or do they just take you along for the ride?
Both … more or less simultaneously. When I try not to predetermine the direction my stories are heading in, I fail miserably. I instinctively build a fluid outline in my head, populated by images, bits of dialogue, sensations, and a rough causal link between most of them. This beast bounces around in my brain even when I’m far away from the computer, developing nuances and filling in gaps in a not-always-linear fashion. However, at the same time, the act of putting fingers to keys often brings out threads that I didn’t initially intend and creates images in a way I hadn’t expected.

Usually the outline remains but acquires more and sometimes surprising detail the more I write; occasionally, I find myself diverted in a different direction – though this happens far more often with novel projects. I most often use typed outlines when I am balancing multiple plots and trying to make sure that everything happens within a reasonable span of time(s) – and then my notes tend to be sparse. My internal outline remains far more complex.

I think my subconscious possibly builds a lot more of an outline than it ever bothers telling *me* about, because I often find myself inserting things on the fly that fit in perfectly as I continue. Conversely, sometimes I find that the story “pulls” away from a plot-point I was heading for, and when I go back to examine the threads that brought me there, I realize that I was aiming in a different direction for a while.

Lindsey Duncan is a life-long writer with short fiction and poetry in several speculative fiction publications. She also performs and teaches Celtic harp, and feels that music and language are inextricably linked. She lives in the Cincinnati, Ohio area and is a student at Indiana University, working on a self-designed major focusing on human belief systems. The world of "Currents and Clockwork", her story in the Fantasist Enterprises' anthology Sails and Sorcery:Tales of Nautical Fantasy, is also the setting for one of her novel projects.